This Ginseng family plant is easily identified by its nice and distinguishable palmate leaves and umbellate flowers. Trevesia is a well-known veggie among the tribal people throughout the north-eastern states and is eaten for its edible leaves and buds. Various ethnic groups (Karbi, Kuki, Khasi, Hmar, Geme Naga) in Dima Hasao district of Assam boil and mash the inflorescence and consume it as vegetable with sumptuous fish curry. The paste is occasionally used as Chutney too. In the north Cachar hilly region, fruits are edible among the local inhabitants. The Nyishi tribe of Arunachal Pradesh eats the plant (locally known as Togo) leaves and young juicy shoots as vegetables, while Komkar Adi tribe of Upper Siang district (where it is known as Tagor) fruits are commonly used to prepare chutney. Perhaps the major culinary references are available from the state of Mizoram, where the flower bud is boiled and then super-charged with onion, garlic, coriander, and tomato to prepare the spicy food. However, on a softer note, it is even taken as simple fry or in the form of “bai” – the traditional Mizo boiled food. 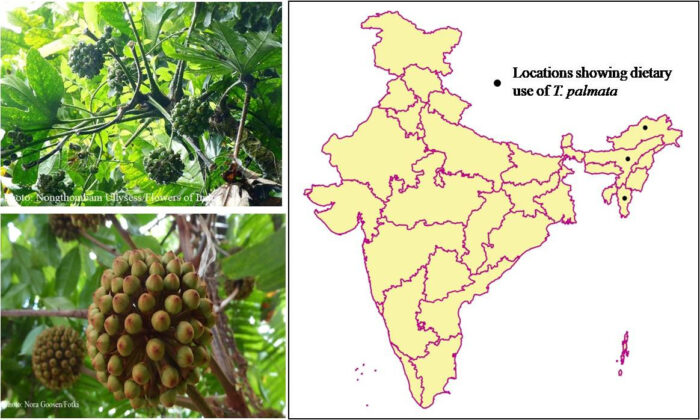 A ground-loving herb, Trianthema portulacastrum is often mistaken as “Punarnaba” i.e. Boerhavia repens. The plant is visible for its small roundish leaves and white flowers. It is quite a popular green leafy veg across the Indo-Gangetic plains and parts of the Deccan plateau, where it abounds. In the state of Jharkhand and Chhattisgarh, the plant is a common leafy green during the summer and rainy seasons. Popular as Khapra sag or Salsa sag, it is either boiled or fried in less oil with a slight touch of chili, garlic, etc. In Odisha, the boiled or fried leaves, as Kachoa, are a popular side dish that complements well with steamed rice. On the other hand, as Erra Ganjeru in Telangana, the leaves are used to prepare curry with Garlic and Pulses. In TamilNadu, fresh leaves are collected, dried, grounded, and then mixed with dry and powdery pulses at different proportions. It is employed in the preparation of dishes like idly podi, murukku, onion chutney, tomato thokku (spicy fresh fruit mash), potato fry, and sambar. It is always better when desired taste makes a good combo with nutrients, as in its case; analyses revealed high amounts of anti-oxidants and vitamin C along with the key minerals like Calcium, Magnesium, Phosphorus, and Potassium. 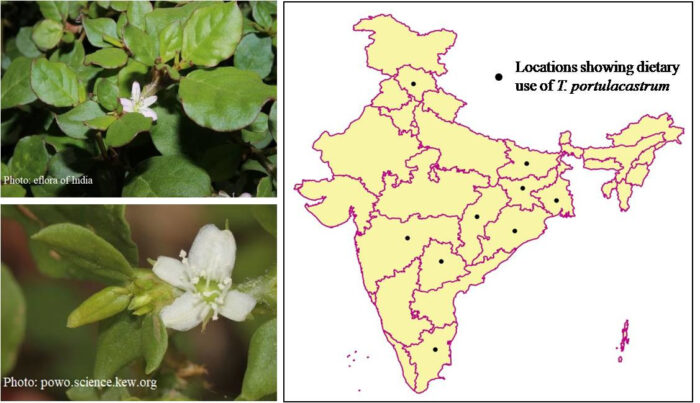 A widely known Himalayan plant, Urtica is especially infamous for its stinging thorns and skin irritations, hardly anyone who came in contact can forget its itchy touch. Though popularly known as ‘Bichhuboti’ or ‘Stinging nettle‘ , its deep culinary connection is far from what can be imagined . In the trans-Himalayan tracts, the plant along with many others is collected by upper-hill people to exchange with barley, wheat, potato, and pea from lower valley people. It has acceptance among montane people who prefer it in soup or curry making, for example, the leaves are popularly used to prepare soup in Sikkim. The collected leaves are boiled in water to remove the thorns and then mixed with oil, garlic, ginger, salt, and pepper to prepare the “Sishnu ko jhol” or “Nettle soup”. However, other forms of delicacy are also in vogue, as in Himachal and Uttarakhand regions, the leaves (locally known as Kandali) are used as vegetable after removing the stinging thorns in hot water. It has many takers in the urban market too, where nettle leaf tea is a fad a. To make nettle tea, the dried leaves alone or with tea leaves are boiled and sweet-charged with honey. The ‘boutique’ tea is rich in iron, calcium, and magnesium and is a solace for tired souls.

Many of us with semi-urban and rural childhood may remember the thorny cocklebur seeds collected from the playground. Those seeds were clever enough to happily move from place to place through our clothes or socks by their sticking thorns. It looks like now that this childhood playmate has tighter link with the ethnic food world. In the north-eastern states of Meghalaya, Assam, and Arunachal Pradesh, the plant is fondly known in many names, Lakra, Parak Hanthor, Ogara, Agora, and its tender shoots are eaten as vegetable. They are often boiled, and mixed with potatoes and other vegetables to prepare delicious curries. Even newer young foliages are consumed, but whether they are tastier, we do not really know! The Bodo people of Assam use the leaves to prepare the starter cake (Angkur) for local rice beer (Jou Bishi).Its acceptance as a vegetable is also reported from the eastern state of West Bengal (Bonokhra), the western state of Rajasthan (Adhasisi), and Maharashtra. In Rajasthan, the Adhaisisi leaf powder with water is used as a coolant during summer. In Andhra, edible oil is extracted from the seed of this plant and perhaps used locally. Indeed! More use as food or supplement awaits meticulous exploration. 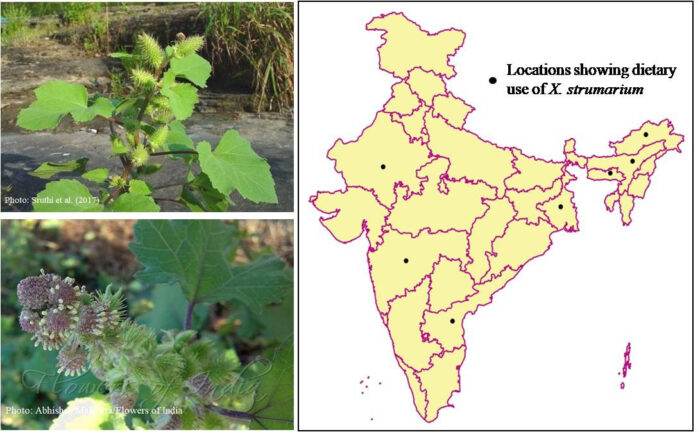