As popularly known as the toothache plant, this commonly available herb belongs to the sunflower family. The plant is visible for its button-like yellow flower head at the top of a long stalk. Although the medicinal properties are well known the knowledge of culinary use is mostly limited to the traditional users and food connoisseurs. Documented sources tell us about its edible use from the north-eastern states of Assam, Manipur, and Arunachal Pradesh and western Himalayan states of Himachal Pradesh. In Assam, tribal groups like Dimasa, Hmar, Mising and Zeme Naga use leaves and young shoots as vegetables in boiled form. It is also a popular ingredient in chicken soup where chicken pieces and Spilanthes leaves boil together with ginger, garlic, and black pepper. For the Mising tribe, this plant locally known as Marsang and is used for preparing special food during religious festivals. Tender leaves of the plant are roasted with Numsing (a traditional fermented fish product) for preparing the final dish. In Manipur, the Zou tribe consumes the boiled leaves as vegetables and chews the raw inflorescence to relieve toothache. Likewise, in Himachal Pradesh, leaves are cooked as a vegetable and fresh flowersare also eaten raw. The plant has another common use in salad preparation. A few shredded leaves add unique flavor to the salad. The popularity of cuisine has nutritional rewards too. Essential micronutrients like Iron, Sodium, Zinc, Manganese, and Copper were reported in various parts of the plant. Similarly, macronutrients like Potassium, Magnesium, and Nitrogen were also detected in considerable amounts. 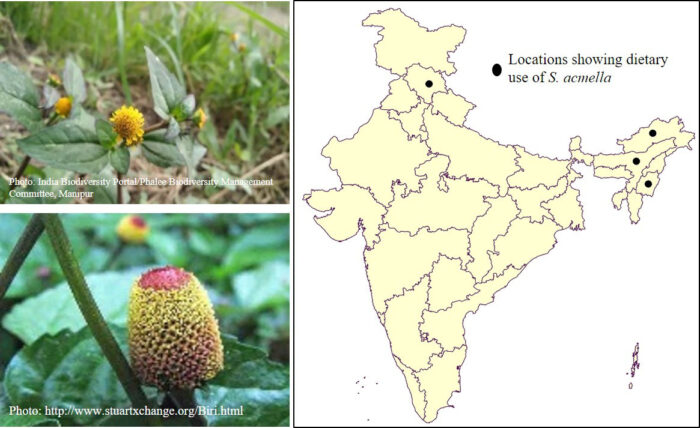 A deciduous tree shedding leaves in the winter is fondly called “wild mango” and is famous for its sour tangy fruits. The fruit is favored in the preparation for pickles, sweet chutney, jam, etc. In Odisha, tribes like Kondh, Santal, Saora, Munda, and Kolha relish this fruit (known as Ambada) both in its unripe and ripe forms. Ripe fruits are eaten directly, unripe ones are used as a vegetable and are used in the preparation of chutney and pickles. In Assam (where it has been known as Amora, Dorge, Chiming), the edible use is extensive like, ripe fruits are eaten, unripe fruits are used as a vegetable to prepare curry and pickles, tender leaves, flower buds, and fruits are also curried with fishes; moreover, seeds are also not thrown away but eaten. In the eastern Himalayan foothills of Darjeeling, dry fruit is used in the pickle preparation. Similarly, in the western Himalayan state of Himachal Pradesh, both ripe and unripe fruits flaunt extensive use in the preparation of vegetable, pickle, chutney, juice, and jam. Even the cut pieces are dried and stored for long-term use. In the Mangalore region of southern India, the fruit (commonly known as Ambate) along with coconut and spices is used in the preparation of spicy Ambadyanchi curry. A slightly modified version of the same (Amadyache Sansav) is reported from Goa where the fruit is known as Amado. The ripe and juicy fruits have been voraciously consumed almost throughout India, Chakma people from Arunachal, Khasi, and other tribes from Meghalaya, Kadar tribe from Kerala, tribals from coastal Andhra Pradesh, and Vasavas from Gujarat to name a few. Nutritionally, fruit is a rich source of carbohydrate (~5g/100g), antioxidant activity (~90µg/ml), and reducing sugar (~7.3%) and powered with vitamin C (~74 mg/100g). 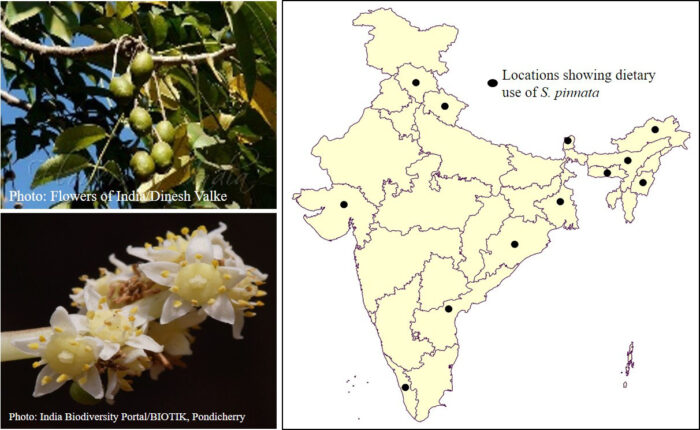 An herbaceous member common along the agricultural fields and roadside areas, the plant marks its presence by tiny white flowers with deeply incised petals. Fondly known as Chikweed in many parts, it is a fairly known vegetable among the rural people who are still attached to the traditional practices. The edible use of the plant as a boiled vegetable is reported from the Kumaon and Kinnaur region of the western Himalayas, and also from Assam (known as Morolia), Manipur (as Yerum-keirum), Arunachal, and Mizoram (Chang-kalrit). In Assam, it has been popularly used in fish curry preparation along with jujube, fenugreek seeds, and small fish. In Manipur, quite similar to its neighboring state, the plant is an ingredient of Kangsoi – a mixed dish prepared with boiled vegetables, fermented and dried fish, as well as other spicy additions. In Himachal Pradesh, the plant (known as Padyala) is used in the preparation of Kachru, a mixture made up of Besan, spices, and plant leaves. Nutritionally, this herb is a good source of vitamin A and C and other essential micronutrients. . 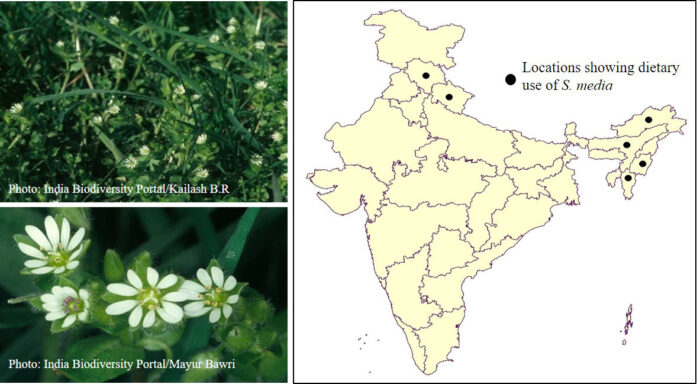 A widely known hydrophyte, commonly known as Water Chestnut, the plant has wide distribution as well as recognition for its edible fruits. It is easily identified by its rosette arrangement of leaves and dark-skinned spiny fruits. The edible use of the fruit is also quite popular among different tribal groups. Among the Santal, Munda, Lodha, and Bhumija tribes of Odisha and elsewhere, the raw fruit (known as Panisingara or Kantaphal) is a desired food during autumn-early winter. Similarly, its extensive consumption has also been reported from many states, like Uttarakhand, Assam, Manipur, Maharashtra, West Bengal, and Rajasthan. Cooked fruit is also consumed as a vegetarian dish in some regions. Apart from fruit, other parts are also cooked and eaten; for example, in Manipur, the swollen petiole of the plant is used in the preparation of the popular dish Eromba. In Rajasthan, the Bhil tribe cooks the rhizome and tender shoots as food during famine. Besides, there are a few popular recipes available from food enthusiasts in urban or peri-urban societies. Nutritional assessment shows that the fruit is a good source of crude fibre, vitamin B, C, and elements like Calcium, Potassium, Iron, and Zinc. It is due to the growing interest in the plant, informal but commercial cultivation is already in full swing in the eastern Indian states of West Bengal, Jharkhand, and Bihar. 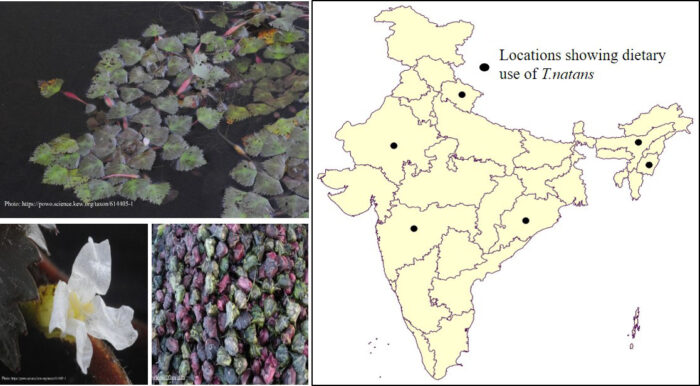 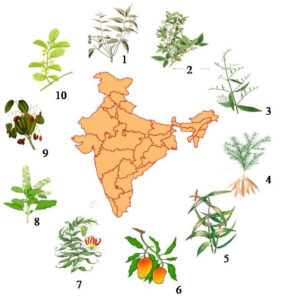 Next post Unity in diversity – the curious case of Ethnomedicine