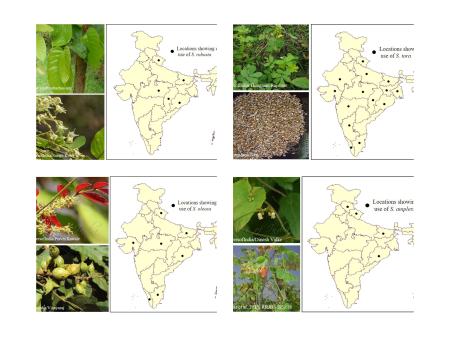 A tall deciduous tree fondly known as Kusum almost all over India, except Tamil Nadu and Kerala where it is famous as Pulipoocha and Puvathu. The tree is primarily well known for its widespread use in lac insect rearing (Kusumi Lac or Kerria lacca), a species of lac insect native to India. However, its popular culinary use in the north Indian states of Chhattisgarh, Bihar, Odisha, Gujarat, Madhya Pradesh, Uttarakhand along with Tamil Nadu and Kerala from Southern India suggests it is no less attractive as food. Ripe fruits, sweet and acidic in taste, are eaten in season by the forest dwellers in Chhattisgarh, Gujarat, Madhya Pradesh, Odisha. In Odisha, unripe fruits are used for making pickles to be used as a taste enhancer in meals. Kusum oil is extracted from the seeds and has domestic use in the rural belts of Odisha. The cooked young leaves are considered as a local delicacy in some of the tribal areas of Jharkhand. Similarly, powdered dried leaves are mixed with rice water for improving taste and flavor. In the western side such as Jawhar area of Maharashtra, seeds, fruits, and young leaves are considered as food by the tribal people. Normally, fruits and seeds are collected, dried under the sun, and stored for consumption throughout the year, while young leaves are used as fresh green vegetables as and when required. 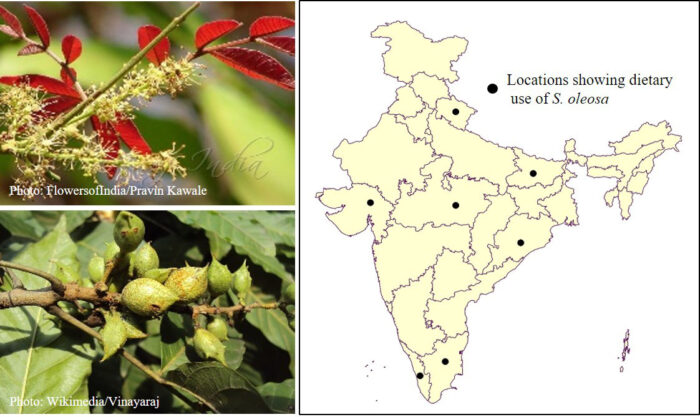 A medium-sized herb with characteristic bright yellow flowers, small oval shaped leaflets, and a commoner in open fields, roadsides, forest fringes, pastures, and railway tracks, Senna tora is omnipresent in all seasons and in almost every corner. Fondly called Chakor/Chakod, Chakunda, Cherauta, Bapduli, Soru-Medelua, Thakara, Paudina, the naming diversity indicates its popularity among people. A majority of the states across India have its culinary use as a leafy green or as a common mix with fish or pork as in Assam. In Konkan region, tender leaves are used in multiple preparations like fritters (Taikile ambado), chutney (Taikile chutney), chutney with curds (Taikile tambali), spicy dosa (Taikile sanna polo) and steamed dumplings (Taikile muddo). In Karnataka, the same leaves are used in preparing fritters and vegetable mix with coconut and jackfruit seeds. Coming to West Bengal, one may taste the soup of the Chakod leaves, prepared in association with onion, chilli, tomato, etc. Leaves apart, seeds are also roasted and grinded to make beverages in Chhattisgarh, Madhya Pradesh, and Uttarakhand. In the Uttarakhand, Gujjar community use the roasted seed powder as coffee. The Meena tribal group in Rajasthan consider both leaves as well as flowers edible. In many places, the leaves are dried under the sun and cooked with maize-dalia to prepare a nutrient-packed dish. Nutrient analysis shows that the leaves are rich in carbohydrate, crude fibre, iron, beta carotene, calcium, nitrogen, potassium and micronutrients like zinc. . 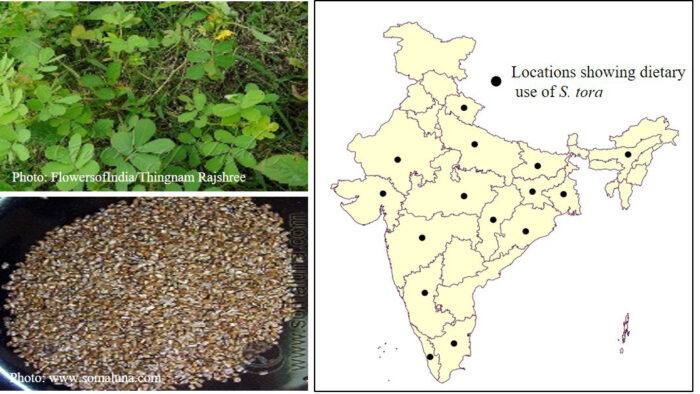 Famous for its winged seeds and long lasting timber, Shorea robusta or Sal is an indomitable member in the forests of central Indian plateau. Distributed across the states of Madhya Pradesh, Chhattisgarh, Jharkhand and sub-Himalayan hill tracts of Uttarakhand, it is valued for its multipurpose usage among the local communities. Culinary use of Sal is less documented except the widespread use of the leaf in baking and steaming purposes. It is the high durability of the leaf against heat which makes it a suitable wrapping material for the preparation of baked sweet (Chenna poda), steamed vegetable, fish, and meat. Although limited, the direct consumption of plant parts is reported from a few areas. Young Sal leaves are taken as vegetables in Jharkhand and Bihar. Similarly, Sal seeds are boiled with Mahua (Bassia latifolia) flowers as a substitute for grain staples in lean season across the Chotanagpur plateau area. In Odisha, raw fruits and seeds are consumed as vegetables with salt and little spices by tribal people. Grounded Sal seeds are also used as flour to prepare bread. Seed kernels contain 14-20% fat (‘Sal butter’) which has a popular use as cooking oil and as a replacement of Cocoa butter in the confectionery industry. Nutritionally, seeds are also a rich source of carbohydrates, proteins, and dietary fibres. 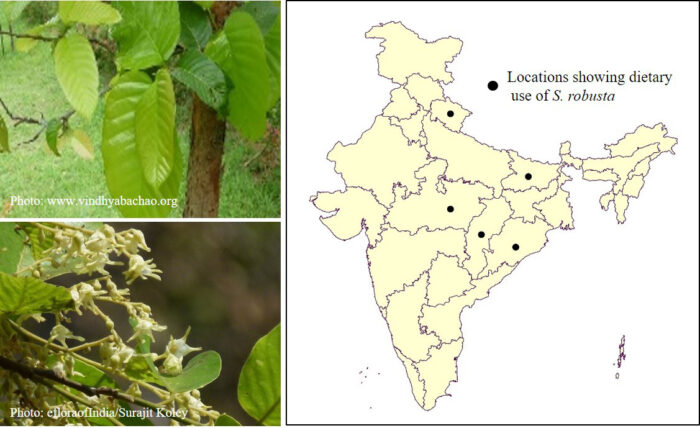 A small climber with its characteristic heart shaped leaves, Solena is one of our well known cucurbits locally known for its high food value. Distributed across the country especially in the moist places, the climber looks enticing for its bright red ripe fruits. In Odisha, unripe fruits are used as vegetables, while underground tubers are taken as snacks by the children. Also, tender shoots and leaves are also taken as green leafy vegetables in rural areas. Across the Himalayan states of Assam, Uttarakhand, and Himachal Pradesh, unripe fruits are one of the popular vegetables among the rural communities. Nutrient analysis reveals the presence of low protein content but higher amounts of antioxidants like catalase, peroxidase, and polyphenol oxidase. 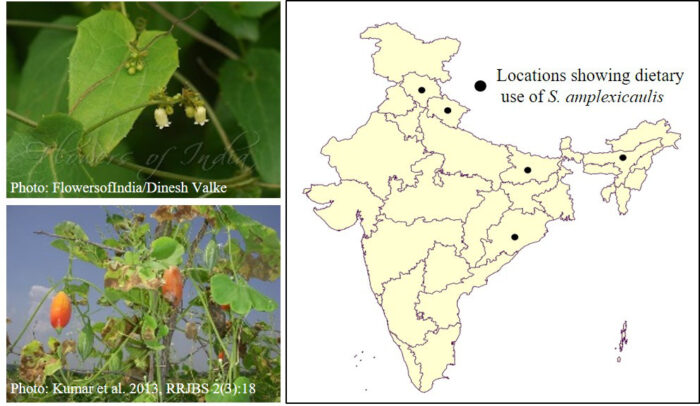 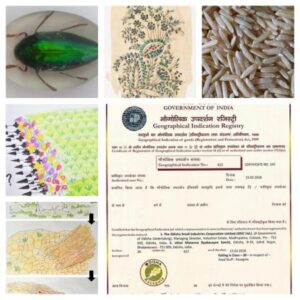