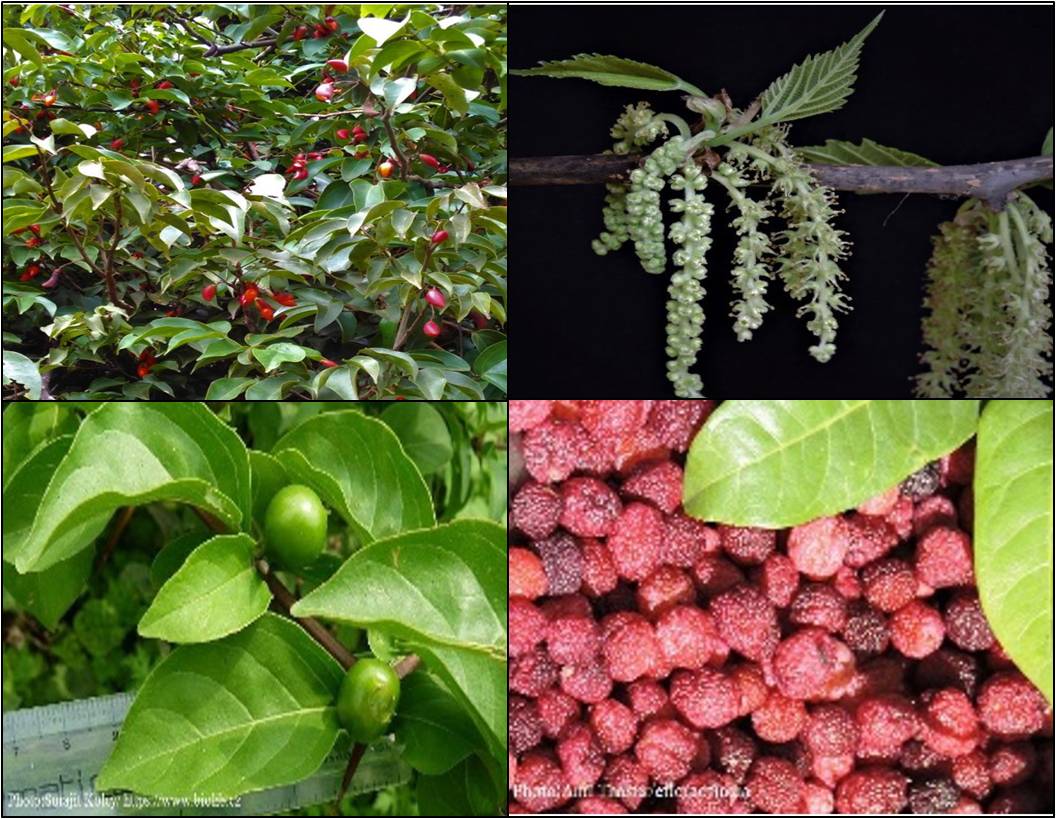 It is a spiny small tree or a large shrub with greenish-white flowers found in the south and east Asian countries. In India, the plant is found in the northeastern states of Arunachal, Assam, Meghalaya and in West Bengal. Down the south, the plant is reported from Andhra Pradesh, Karnataka, and Tamil Nadu. It is called Moin Tenga in Assamese, Maina in Hindi, Mankatha in Bengali and Manakkarai in Tamil. It is widely popular as a folk medicine among the tribal peoples of Manipur, Assam, Maharashtra, Meghalaya. They also prefer to eat the fruits either in raw or in cooked form. The fruit is small and yellow when ripe. The fruits and leaves are good for the liver and supposed to help in treating indigestion. In Meghalaya, the fruits are also used to prepare an alcoholic beverage. The seeds are roasted and powdered to be used as a tea. In Odisha, seeds are roasted and eaten by the tribes during summertime. Nutritional analysis shows that fruits are a rich source of essential nutrients, e.g., Calcium, Zinc, Potassium, and Magnesium. Similarly, leaves are enriched with Iron, Zinc, Copper, Manganese, Molybdenum, and Chromium which contribute to their antioxidant property. 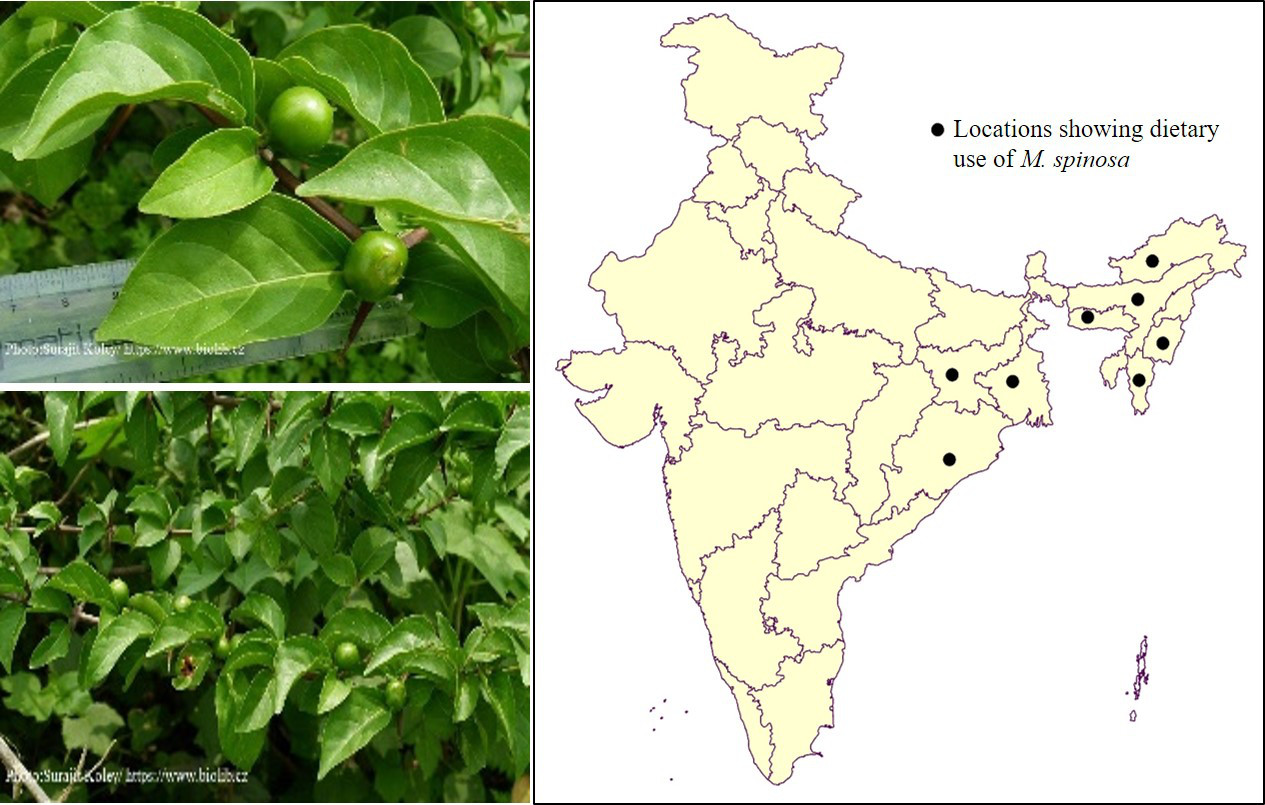 This medium-sized fragrant evergreen tree is native to India and also found in the tropical forests of South Asia, Southeast Asia, and northern Australia. It belongs to the Sapotaceae family and is famously called ‘Bakul’ in the northern and ‘Elenji’ on the southern side of India. It has been planted throughout the country and is among the popular avenue trees found all over except the extreme ecosystems. The culinary use of the plant is less known in comparison to the medicinal use of its bark, flowers, fruits, and seeds. In northern states of Odisha, West Bengal, Assam, and Arunachal Pradesh ripe fruits are consumed as raw, whereas in some other places, the fruit is a common ingredient for pickles. The fruit is rich with carbohydrates, protein, sugar, and minerals and is nutritionally comparable with any other widely-eaten cultivated fruits like mango, guava, pomegranate, sapota, etc. 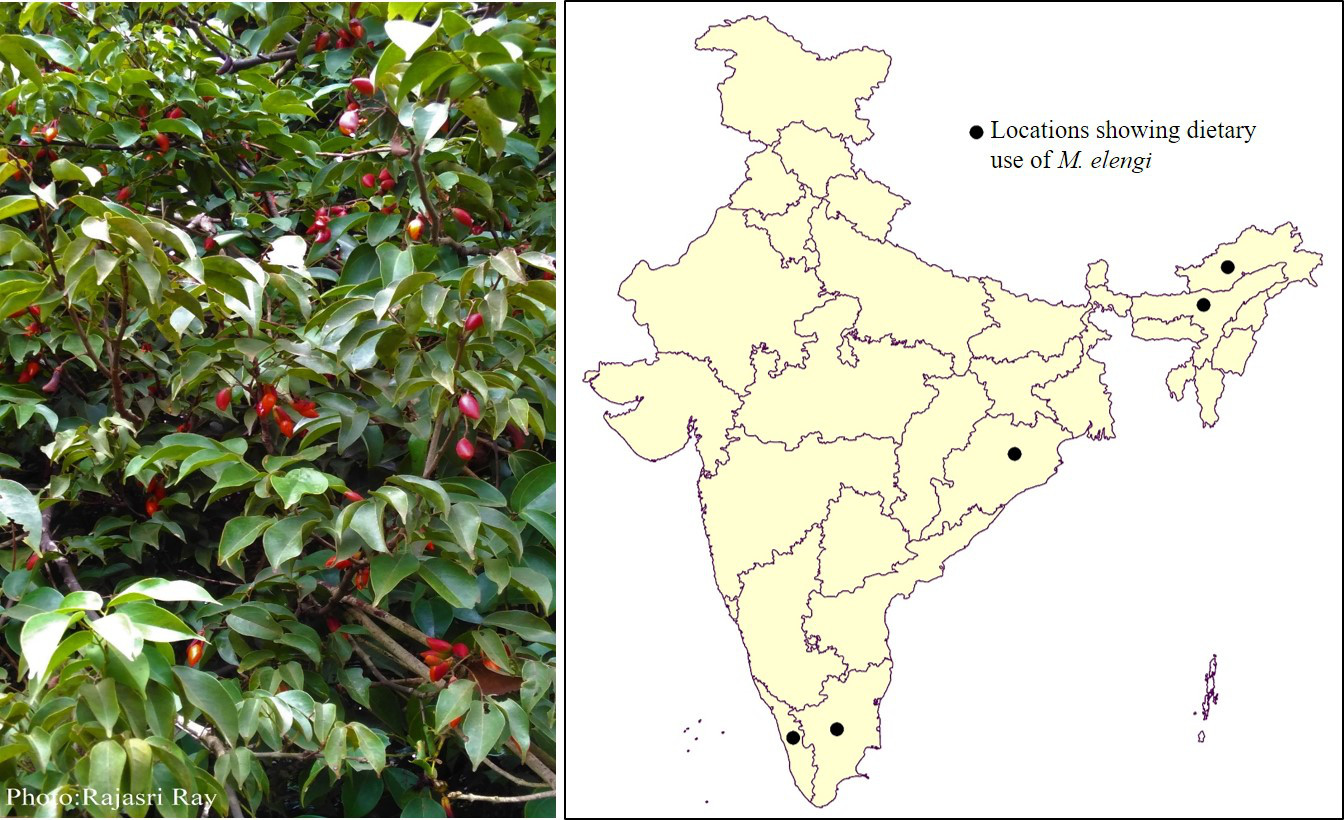 This is popular as ‘Himalayan mulberry’ and known as ‘Kimmu’ in the northern parts of India. It is mainly found in the Himalayan tracts up to an elevation of 3300 mt. It is a small deciduous tree can grow up to 15 mt with leaves that are densely hairy on the veins underneath. The fruit is edible and in clusters of several small drupes turns red upon ripening. The tree leaves are used to feed silkworms and the fleshy fruit is sweet and eaten raw. Apart from their traditional consumption by localites, fancy edibles are also prepared from it, e.g., these longer fruits can be dipped in chocolate and made to variants of strawberry chocolates. Already these berries have found importance as ‘superfoods’ and available online from many stores and trendiest markets. The fruit is rich in carbohydrates, vitamins, and minerals. Though it’s eaten quite regionally recently efforts are made to enhance the processing options like dry fruits, jams, squash, and juices; it is on its way to find the status of alternate food especially in the urban areas. 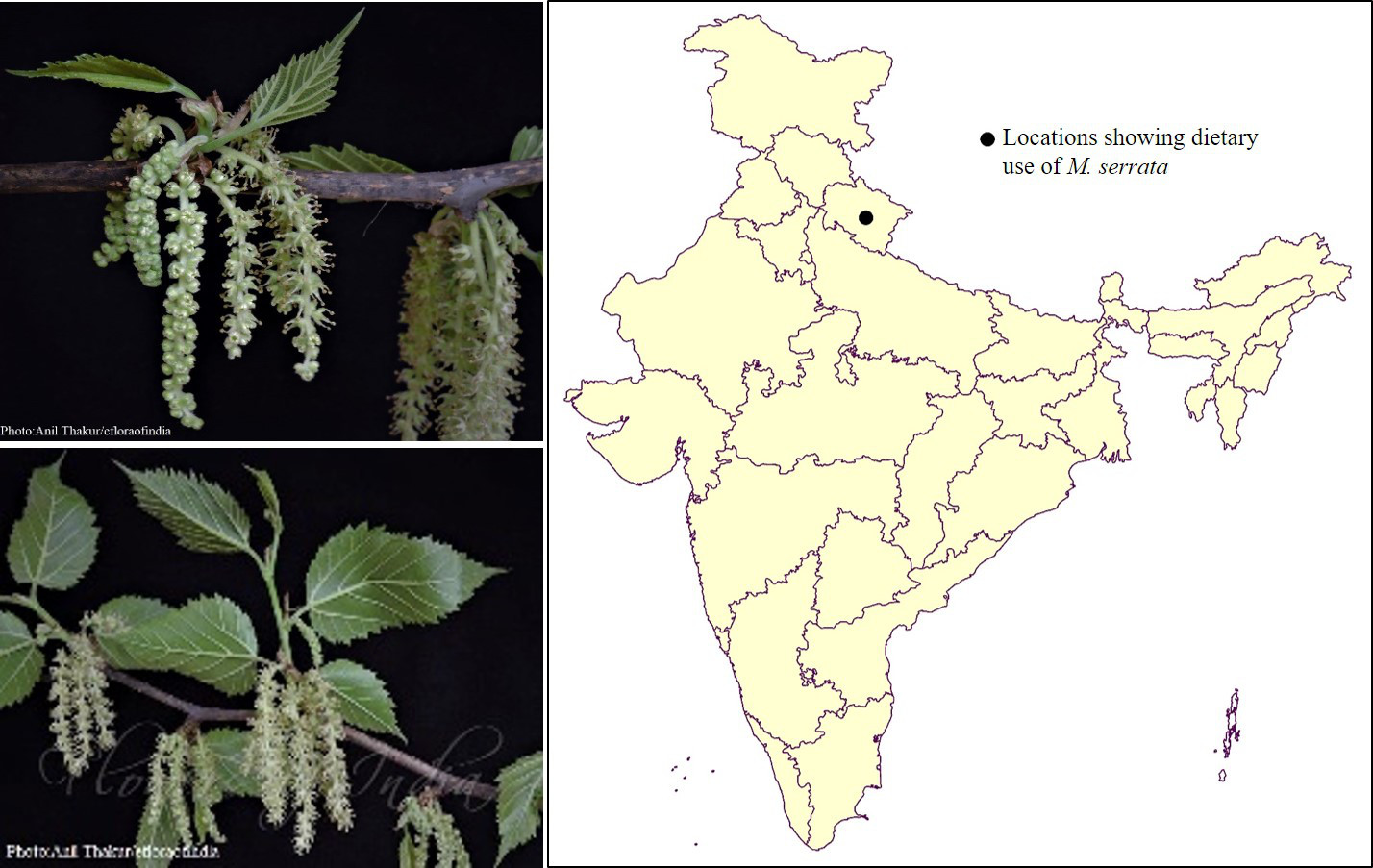 Myrica esculenta, a member of Myricaceae, is a tree of medium height with white flowers found in bunches. Fruits are globose or oval, bright red to dark brown color, and sweet and sour taste. It wears many names, Box berry, box myrtle, bayberry or Kath phal or Kaphal. It is found in hilly regions of northern India around Garhwal and Kumaon of Uttarakhand, Himachal Pradesh and the neighboring states of Nepal and Bhutan especially at elevations of 900–1,800 m. The fruits are eaten by the locals either raw or used to make juices, squashes, and jams. The fruit is high in minerals like Magnesium, Calcium, Potassium, Phosphorus, Sodium, Zinc, Iron and Copper. The fruit is a good source of vitamin C and is considered as one of the tastiest fruits of the sub-Himalayan regions. The dried bark and fruits are also available online and are finding places in modern kitchens and ecofriendly restaurants. The roots and fruits are constituents of ‘Chyavanprash’ and ‘Brahma Rasayana’. A large population of Uttarakhand and nearby areas uses the decoction of the bark as a mouth freshener. Despite its untapped potential the cultivation of the tree is very much limited and is only confined to the wild. The regeneration of the plant is very poor and thus demands active human intervention for propagation. 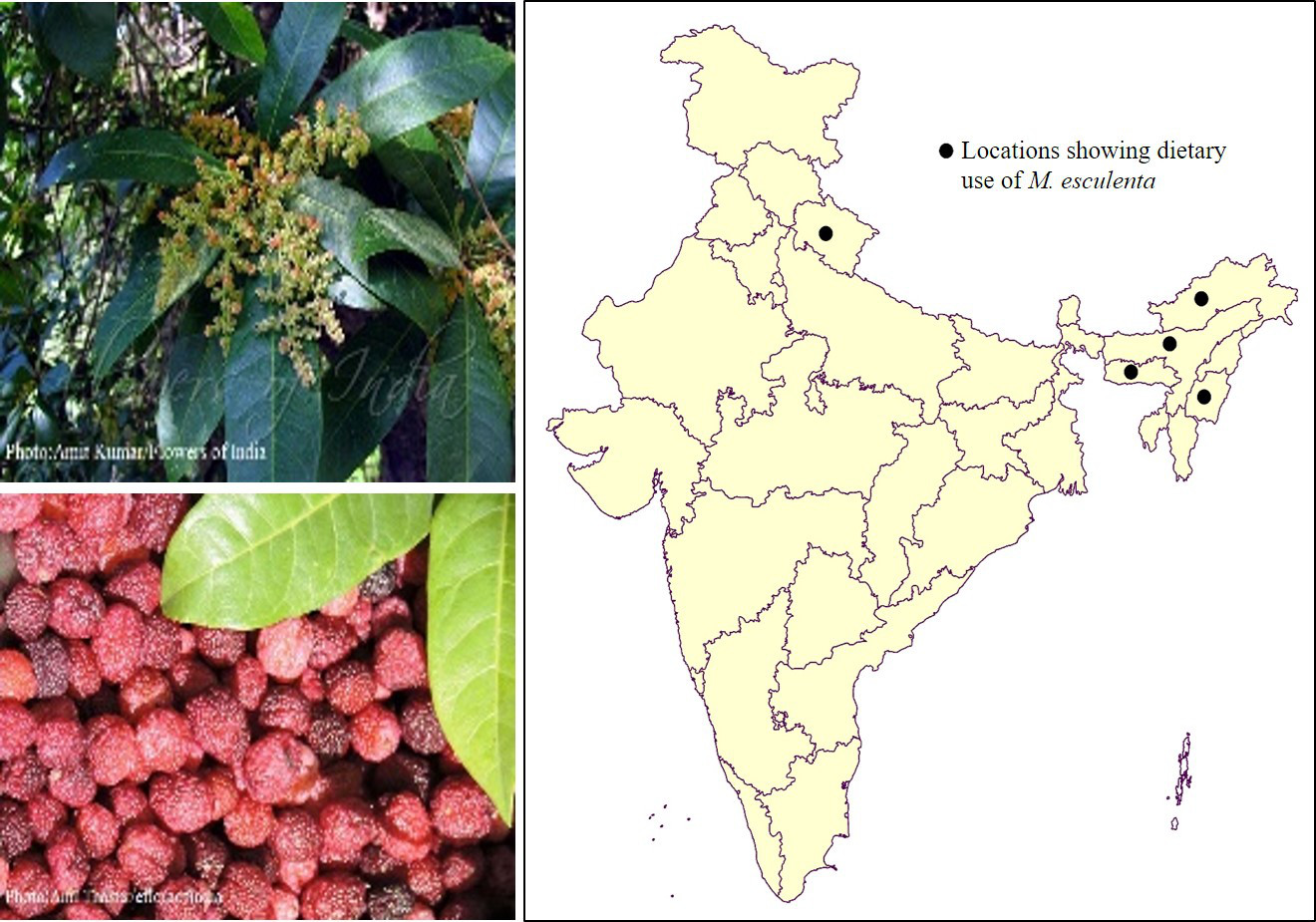