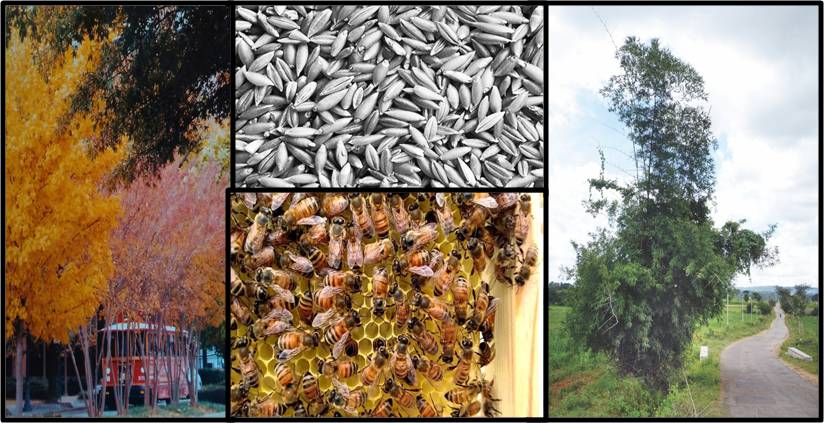 Whether you flee from a stinging bee or are enamored by the sweet honey on your pancakes, 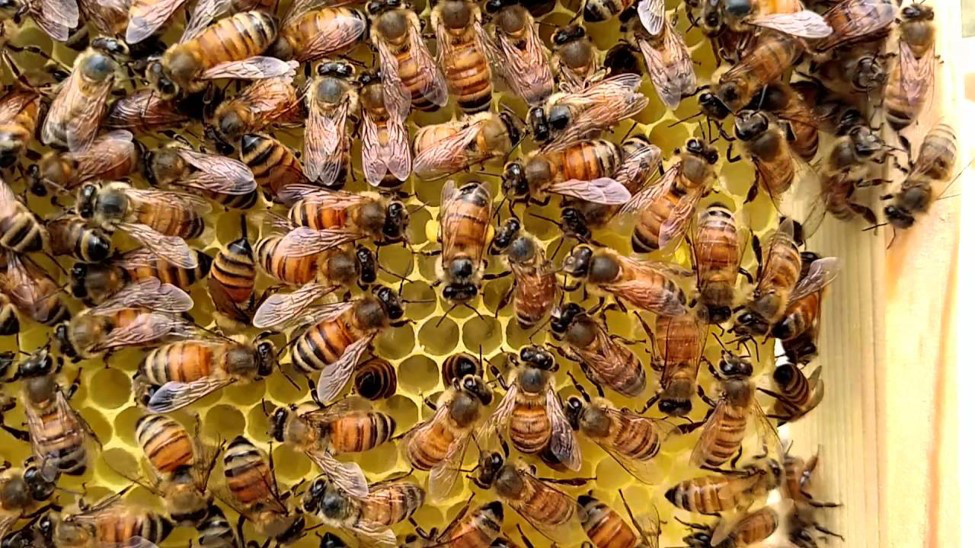 there is no way that you can ignore a dancing bee! Bees are quite famous among ethologists for what is termed as a ‘waggle dance’. Nobel laureate Karl Von Frisch was among the first to interpret this rather peculiar behavior of bees. The worker bees perform this curious dance to convey the location of food, nectar, pollen, new nesting spots and water sources to the other members of their colony.

The dance is a biphasic process: the waggle and return phases. The bee does a ‘waggle’ (curved trajectory) to create small figures of ‘8’. The bee performs a waggle run which is directly correlated with the indicated resource in terms of direction and duration. There is a range of behavioral signs and variations shown among different species. For instance, Apis mellifera has waggle runs that are made at an angle with respect to the direction of their combs(vertical) so as to indicate the location of flowers corresponding along the direction of the sun. The duration of the dance is to give an estimate of the distance; the more the bee wants to ‘convince’ the others, the more vigorously it dances. 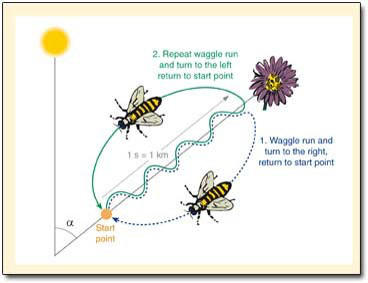 The mechanism is quite effective as the bees accommodate the changing directions of the sun in their waggle dance to make sure they reach the required resource.

So, how do they do it? The bees can develop charges on their wings while flying and they can manipulate the surrounding electric field by emitting frequencies (high and low). The antennae of audience bees are thus stimulated and it has been suggested that their mechanoreceptors play a key role during this interaction. Though the dance is majorly intended to locate foraging sites, Martin Lindaeur has theorized that the in the light of evolutionary perspective, the intent of the dance was originally for new nesting sites.

An experiment in 2008 showed that when honeybees of Apis cerana cerana and Apis mellifera ligustica were mixed, the difference in the subtleties of the dance was noticed by the participant bees and soon they learned to interpret the ‘dialect’ of the other group. This also directs our attention to the fact that different species have different ‘dialects’ of the waggle dance in terms of the path, time period, etc. Interestingly enough, other members of Hymenoptera also show this ethnological character. Many developers of computer algorithms have already found ways to draw inspiration from this behavior while designing software and coding.

While it all rather interesting, one must also keep in mind the various contradictions and controversies regarding the efficiency of this dance. Some studies suggest that almost 93% of audience bees travel to known foraging sites while some others suggest that the dance just triggers a foraging attitude.

Nevertheless, waggle dance of the honey bees is an area that demands everyone’s interest due to its unique nature and the potential evolutionary knowledge we can gather from understanding the origin of such dances and their transformation with time. Humans can learn a lot of things from nature for sure, but who knew that we can also learn to sway to a beat!
Collector: Aishwarya H. Iyer

Come summer, we are enchanted with the flowering burst in evergreen and deciduous trees – a very known phenomenon everywhere especially in tropics. But, hold on, leaves are not far behind. They have their turn in autumn, when, temperate countries in the northern and southern hemispheres witness the riot of colors in deciduous trees before annual leaf fall. This is also a popular event fondly known as autumn color, autumn foliage, fall color or fall foliage. The coloration is an adaptation for the approaching winter period when there is a limitation in photoperiod and a decrease in temperature, 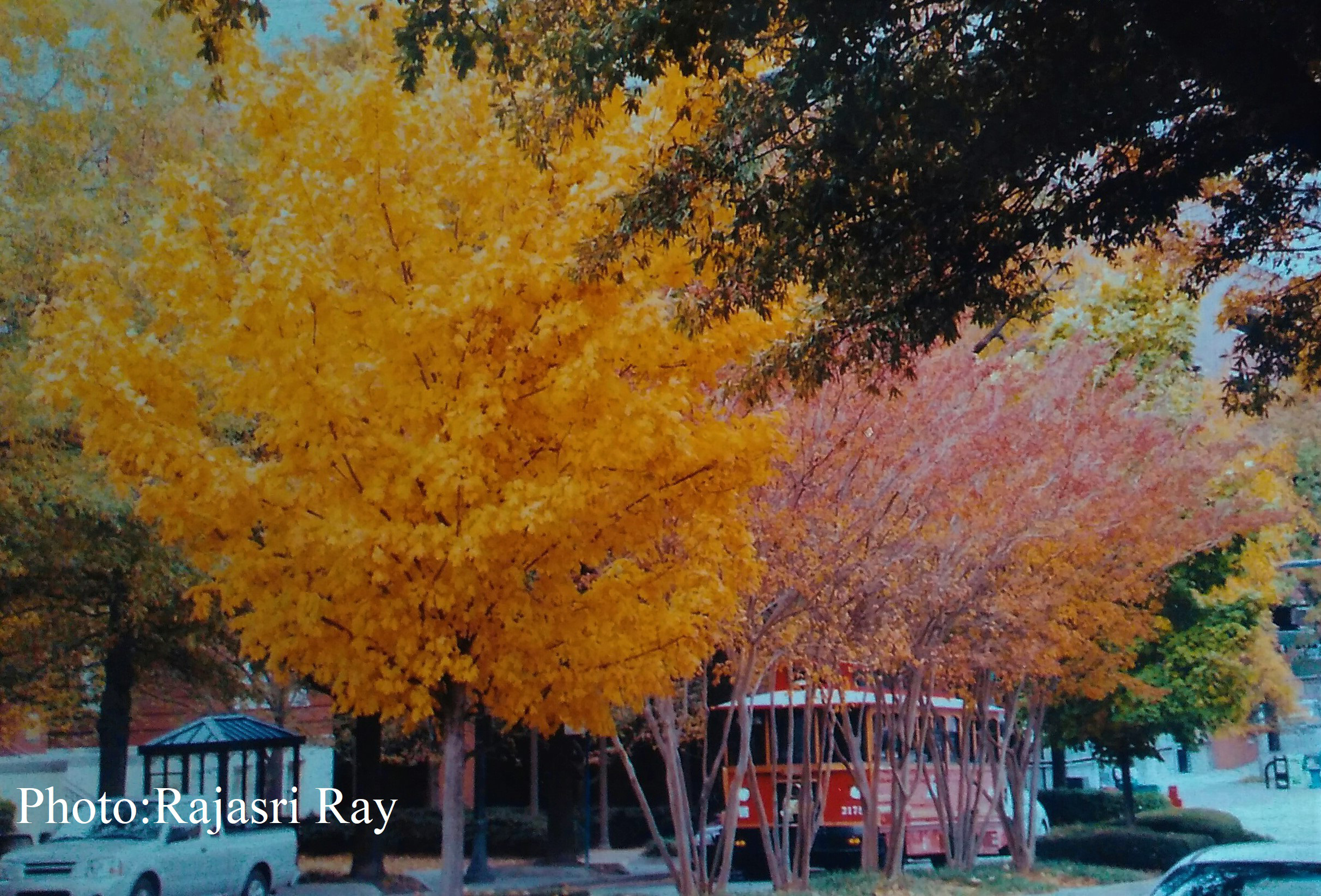 which are not favorable for plants’ profound activities. So, if spoken in biological terms, there is a slowdown in photosynthesis, gradual degradation of chlorophyll and releasing of other pigments, thus, there are leaves with different colors.

This purely physiological event has many takers. For instance, leaf color acts as a signal for the availability of fruit (fruit flag), or conversion of light into heat (leaf warming), or enhancing parasite visibility (anti-camouflage) or supporting mutualism among plant-aphids-ants (tri-trophic mutualism), and so on. Interestingly, leaf color also flaunts signals for some special guests. Coevolution theory suggests that leaf color acts as a deterrent for specific aphids; intense the color is stronger the resistance against colonization. But, on the flip side, the plant has to pay for it. Here it is a loss of photosynthesis, nutrients and energy consumption in pigment synthesis thus making the plant handicap to some extent in terms of fitness. This cost-benefit relationship mimics the famous ‘handicap signal’ in the animal world where one has to compromise its fitness for long term survival benefits.

Far from academic interest, leaf coloration fetches a huge chunk of money. In the northern countries, a special sect of tourism is in fad known as “Leaf pepping” where tourists are directed towards the places where leaf coloration at its peak in the season. However, changing climatic patterns is affecting this coloring event and leaves reported to remain green for a longer period than earlier. So, the autumn color is not only a sheer visual treat but the beauty with locked-in mysteries of nature.

Humans have an ingrained urge of exploiting natural resources found at their fingertips. Because, that 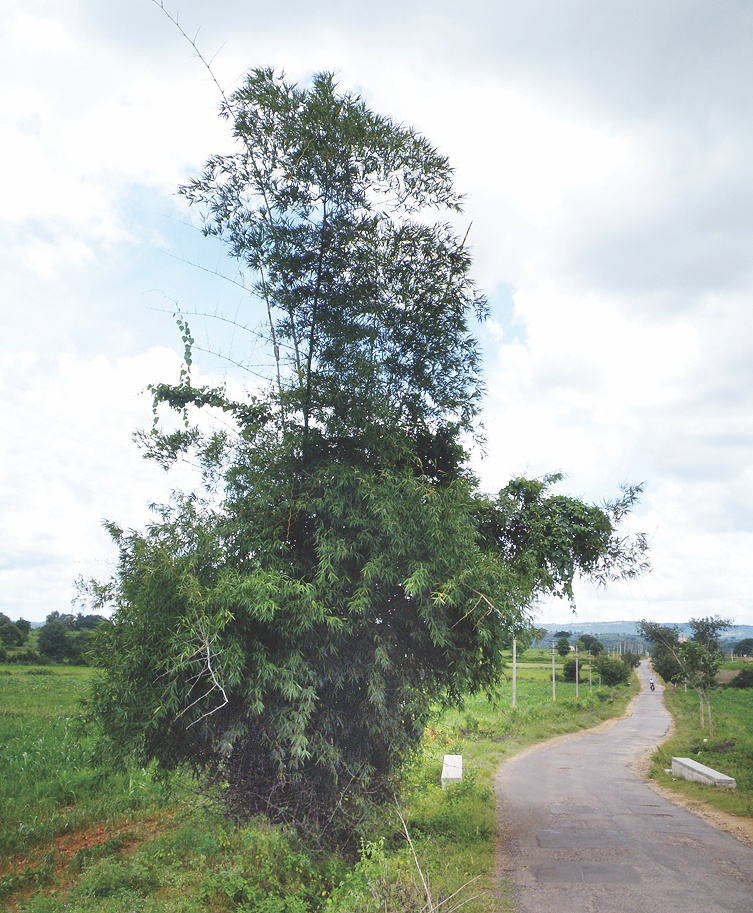 allowed them to save their energy instead of walking for miles in pursuance for food. Apart from the domesticated grass species, such as rice, millets, wheat, barley or oat, a wide variety of grass or forb species have been exploited for their seeds, these energy-dense pre-cereal grains were a good source of nutrition. They often demanded a processing followed by harvest and were mostly made into sumptuous porridge or bread to satiate their stomach. However, from a rich repertoire of plant species consumed by our prehistoric forefather only a handful were able to made their permanent place as global staple. And, most were left out in this race falling short to meet the human need. Many remained localized, hidden in a forest or under-recognized in the waterbodies, or mixed with their domesticated brothers. Some still find their way to the connoisseurs’ palate as occasional cuisine for special events or festivals.

Such an example is bamboo rice or Mulayari (in Malayalam) or Moongil arisi (in Tamil) which is locally famous in parts of the southern India. Tribal known as Kani or Kanikaran or Kanikars (agriculturist tribes living in forests of Kanyakumari and adjoining Kerala forests) dwelling around the Western Ghats possess a vast knowledge harvesting the seeds of bamboos (mostly Bambusa bamboos). Indigenous throughout India (except the northern part) from the hills upto 915 m and in the plains, this is the quiet abundant species of bamboo in the region (Moongil in Tamil) can attain a height 30 m and a diameter of 18 cm. The green culms turn to a straw-yellow color on drying. The bamboo can be 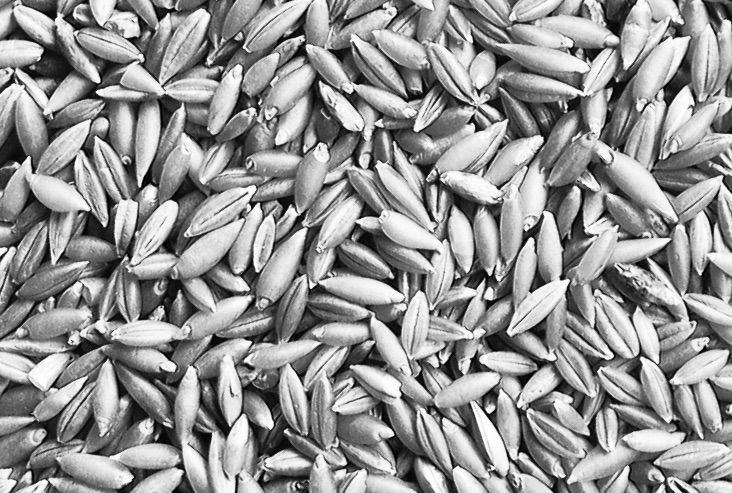 easily identified by thorns and large yellow culm-sheaths. Commonly, it flowers gregariously though at long intervals, produces seeds for next generation to come up, and finally dies down. To collect the mature seeds, the Kanis clean the ground around the plant and patch the floor with cow dung; it follows the collection of the fallen seeds mostly by the women and the children from the cleaned floor every morning and evening. Kani people used to set a traditional rat trap called Elipori to catch unwelcome rodents sharing their resources. Excesses are sold in the adjoining forest areas which perhaps arrives at the urban markets after passing through many hands and when price soars up to almost rupees two to three hundred a kilo or even more.

The nutritive value of bamboo seed is higher than that of rice or wheat as it contains minerals such as Ca, P, Fe, Mg and vitamins such as vit B1, nicotinic acid, riboflavin and carotene. It is believed to possess medicinal properties and a healthy food for diabetics. Delicacies like payasam are prepared during festive seasons or on special occasions and are well a part of traditional food lives.

Bombay Duck – duck or a fish

names of artifacts, names of villages. Sometime the antiquity of names goes back deep in the history and left little-changed over the time. Our biological-cultural heritages also flaunt such a diversity of vernacular names, the heirloom rice we eat or local landrace of vegetable or a nondescript herb, many a time the name associate with the place of origin or special feature of the biota or sometimes the name could be earned through other routes which may have a much lustrous cultural historic connotation.

The name Bomaby Duck tickle our imagination in that sense!

A species of lizardfish, Harpadon nehereus which is most famous as the Bombay duck throughout the western coast. An abundant species across the Indo-Pacific is available from both the coastal regions of India. The body is slimy with an average size of 25 cm but adults may attain a length of 40 cm. Though cooked and eaten as fried or curried, it is one of species often consumed as salted and dried. Very popular among Indians from Bengal, southern Gujarat, coastal Maharashtra, Goa, and Karnataka, it is also quite favorite among Bangladeshis as well.

All is well, but why duck? It does not fly like one! And that too from Bombay while it is found in tonnes throughout the Indian coast!

So, there are stories but not conclusive ones, so might take with a pinch of salt.

One story attaches it to the transportation of the dried fish by early Indian mail train in the days of the British Raj. Perhaps, the strong smell of the dried fish became synonymous with the mail train (the Bombay Daak). But critiques say the word could be older than the earliest railroad in Bombay. The other story pulls Robert Clive into the scene saying he was the first person to use the term and later popularized in the Indian restaurants in the UK. It somewhat goes like this: presumably Robert had tasted a piece on his sojourn to Bengal and compared with the smell with that of the newspaper and mail delivered in the cantonments from Bombay.

We do not know the true one, but that does not matter much here, even the wrong one has become a part of the story; and stories are what we are always love to listen.

So, name is a not merely a name, it is much more – a slice of our world!