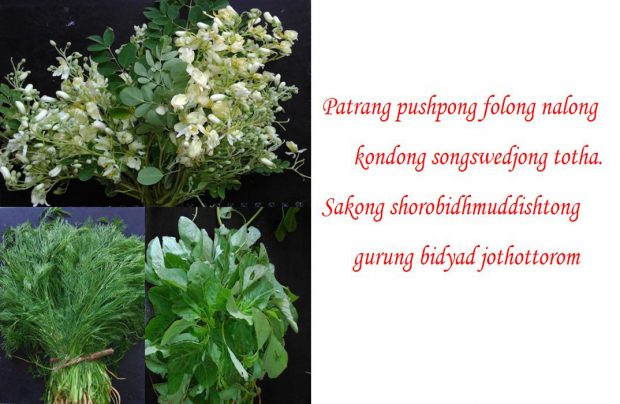 Today Radha, Jyotsna, Nandarani, Bimala are very busy. They are going out for a hunt as part of an ancient Bengali ritual, Bhoot Chaturdashi. It involves finding some specific edible greens which will drive the ghosts away. The ritual practices of Indian sub-continent are often underlined with ethnobotanical significance many of which yet remains to be unveiled. Bhoot Choturdoshi, celebrated on the day before Dipanwita Amabasya/Kali Puja can be addressed as Bengal’s own version of Halloween as bhoot literally translates to spirit! And just like any other Bengali ritual, it is connected to special food – leafy greens in this case. This ritual food famously called ‘Choddo Shaak’/‘Fourteen Greens’. It traditionally involved the collection of fourteen uncultivated greens by women from their homestead gardens or home surrounding areas like roadsides, ditches, ponds or canal banks, field bunds. Uncultivated meant those plants which are not purposefully cultivated in fields but grown on their own. While agriculture entailing domestication of several plants secured food and nutrition security it has overlooked many. Yet it is a common traditional knowledge that many un-cultivated greens, fruits and vegetables have been part of the rural lifestyle for ages. Choddo shaak is thus a ritual of celebrating such uncultivated greens. It ensures that while focusing on agricultural fields on a few types of crops the enormous variety of uncultivated foods in our surroundings is not lost or loses importance.

The historical origin of Choddo Shaak ritual – Role of Bengal

Though the word shaak currently implies leafy greens in modern Bengali language (later denoted as B.), the word shaak was traditionally used in Ayurveda to denote six different types of greens. The verse explaining this is: 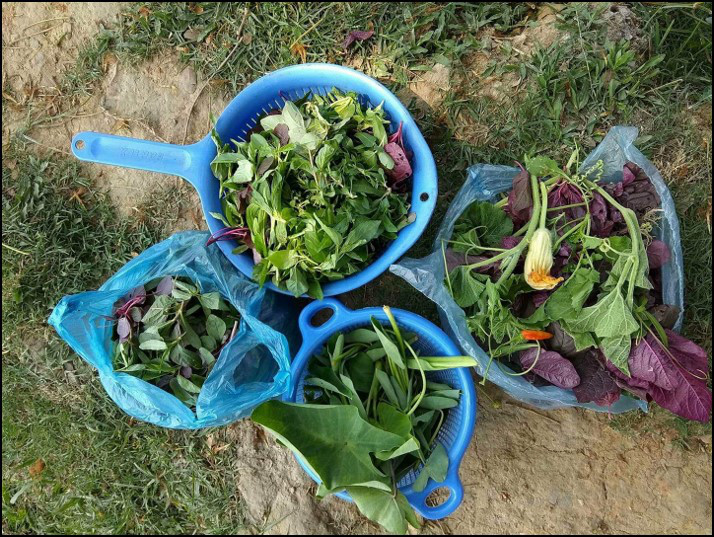 These are leafy greens e.g. spinach, floral greens e.g. Banana flower/B. Mocha, fruit greens e.g. Bottle gourd/B. Lau, tuber greens like Taro/B. Kochu, shoot greens e.g. shoot of Elephant Foot yam/B. Olkochu, mushrooms e.g. Termitomyces heimii/B. Durga Chatu (Bhattacharya 1989, pp.1-5). In 6/24/4 sūkta of Rigveda, a place called Shaakdwip, located in eastern India is mentioned where several Aryans lived. Here ‘Shaakal’ otherwise known as ‘Baskal’ branch of Rig Veda originated. They use to rely on mostly greens instead of meat. These group of people later spread to other regions and came to be known as ‘Shaakdwipi Brahmins’ due to their food habit. It is mentioned in the 13th verse of chapter 84 of ‘Banaparba’ of Mahabharata that Yudhisthira has visited ‘Shakambhar Tirtha’. It is a place in Shaakdwip where Shakhambhari Debi, a deity who eat Shaak was worshipped by serving Debi Shaak for fourteen days’ time period (Sanskrit Choturdosh).  It is also mentioned eating of only Shaak for a month-long vrata is comparable to the virtues gained through Asmawamedha Yagna.

Thus it is opined that the practice of eating greens to celebrate Shaak Choturdoshi Vrata was started by ‘Baskal’ or ‘Shaakdwipi Brahmins’ (Bhattacharya 1989, pp.1-5). However, there was no mention regarding the period when this particular practice should be done. Krityatatta (16th century C.E.) written by Raghunandan first mentions about the ritual of eating Choddo Shaak on Bhoot Chaturdashi (Bhattacharya 1989, pp.1-5). The verse is:

The fourteen greens consumed during Bhoot Choturdoshi are given in the following table:

Yampukur vrata, a ritual celebrated by Bengali unmarried girls throughout Bengali Kartik month (mid-October-mid November) diminish the fear of facing hell. It involves making of a small square-shaped model of a pond. The bunds of the pond are planted with Kochu, Turmeric, Kalmi, Sushni, and Hinche, along with rice seedlings are planted in the middle (Basak 1998). The verse said while watering the pond is:

The practice of eating leafy greens can be traced in scriptures as old as Charaka Samhita (c. 700 B.C.E.)

meaning ‘‘in rainy season our body becomes numb/cold. With the advent of autumn, our body becomes suddenly warm by sunlight and often suffers sudden bile upsurge. So sages have alerted us to consume greens in this season to be safe’’ (Bhttacharya 1989, pp.1-5). In  Markandaye Purana (7th century C.E.) we get the eulogy of Shakambhari Durga. It denotes that Debi is creating greens, tubers and fruits from her body to save and feed the world from famine. Thus the concept of nutrition garden is not only a need for Indians but also a part of their religion and culture. Mention about consumptions of uncultivated greens is also available in Prakrita Paingal (9th-14th century C.E.), written in Apabhramsa language mentions (Roy 1959, pp. 444). The verse is:

which means the one who is served by a woman to eat warm rice with gawa ghee (ghee made from cow milk) along with milk, mourola fish (Amblypharyngodon mola) and nolche shaak on banana leaf is lucky.

Here the greens mentioned are Lamb’s quarters/B. Betho, Bethua shaak, calabash/ B. Lau shaak (Lagenaria siceraria), chickpea/B. Cholar shaak (Cicer arietinum). Thus it is evident that the practice of consuming green with rice is a part of Bengali cuisine culture since long.

Mentions of greens as foods of Bengalis can be also traced in different Vaishnava literatures of 16th century C.E. Chaitanyadeva, the great Bengali saint, himself was fond of eating greens. Bangaleer Itihas (1959) written by Niharranjan Roy also testifies that leafy greens formed a significant part of cuisines of Bengal’s people. It is also very common among Bengalis of Bangladesh. Many of these greens are collected as uncultivated food mainly by the female members of the family in rural Bengal. Other uncultivated greens of Bengal not mentioned in Krityatatta but commonly popular as consumable greens are:

In the current scenario of climate change imposed agricultural risks when food and nutritional insecurity is held to be directly related to the degradation of public health these ancient rituals should be treated with additional importance. All of these greens are a significant source of several micronutrients. Over-reliance on very few crops has been gradually unleashing the terrors of micronutrient deficiency throughout the world. This consequently is resulting in a different form of hunger called ‘hidden hunger’ which is often ignored or overshadowed by the hunger of energy deficit (Roudart 2002). Global statistics attest to the fact that more than 3.1 million child deaths were attributed to undernutrition (UNICEF 2018a), and that deficiency in iron, zinc, or vitamin A caused an additional 750,000- 850,000 deaths (Food and Agriculture Organization 2004). According to National Family Health Survey (NFHS-4) 2015–2016, 38.4% of Indian children, below the age of 5, were stunted & 35.7% were underweight.  The latest Global Nutrition Report showed that 48% of rural Indian women of reproductive age group are anemic (IFPRI 2016), 1/5th of Indian women in the reproductive age group were suffering from chronic energy deficiency while an-other 1/5th were obese (IIPS and ICF 2017).

The ancient rituals discussed is most probably done with intentions to keep the practice of consuming greens both cultivated and uncultivated as all of these fourteen greens mentioned  in Krityatatta have some medicinal value which is briefly discussed below (Bhattacharya 1989,  pp.1-5).

The consumption of greens will keep the persons healthy, boosts their immune system and will hence keep away the probabilities of ailments. The growing problem of under-nutrition can be only dealt with by addressing compounding factors involving nutrition-sensitive agriculture, increasing incomes, improving food accessibility, shifting dietary patterns, nutrition education and health awareness. Setting up a kitchen garden having these seasonal greens can contribute to this aspect.

It is most plausible that the several illnesses which can be kept at bay by regular consumption of greens are considered as ghosts in these rituals (Singh et al. 2017). The period of celebrating Bhoot Choturdoshi in the month “Kartik” (Bengali pre-winter month) ritual coincides with season change from autumn to winter. This period is accompanied by several diseases like seasonal cough and cold, allergic rhinitis/coryza (inflammation and irritation in the nasal membrane), seasonal skin rashes, gastrointestinal dysfunction and Seasonal Affective Disorder (SAD), type of depression with a seasonal pattern, mostly occurring in the winter and autumn (Singh et al. 2017 and references within). Consumption of the fourteen greens at this time, therefore, aid in retaining our strength and ward off the dangers. This is because as discussed before in details these greens exhibit antihistaminic, antimicrobial, hepatoprotective, antihel-minthic, anti-inflammatory, psychopharmacological, immunomodulatory, anticonvulsant and anxiolytic activity any one of these individually or more (Singh et al. 2017 and references within). Hence it is high time we try to decipher the underlying values of our age-old rituals instead of simply discarding them as mere superstitions.

Biodiversity at work: a glimpse into the world of Functional Diversity

Posted On March 24, 2020 ~ 0 Comments
Today Radha, Jyotsna, Nandarani, Bimala are very busy. They are going out for a hunt as part of an ancient Bengali ritual, Bhoot Chaturdashi. It…

Biodiversity at work: a glimpse into the world of Functional Diversity

Posted On March 26, 2020 ~ 0 Comments
A visit to the museum mesmerizes us with a fascinating set of collections; the same happens when we are in the botanical or zoological garden…