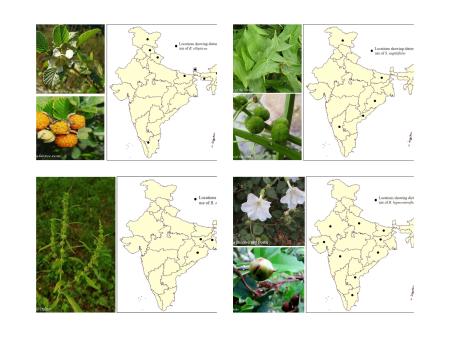 A woody climbing shrub distributed across India is well-known for its medicinal potential. The leaves and young shoots are widely accepted as vegetables and are assimilated in culinary practices of the rural communities. In a variety of forms, the plant is consumed, either as boiled items (with chili and pepper) or as ingredients in other preparations like Bhaji (cooked with onion, salt and chili) or in Roti (mixed with Millet). Locally known as ‘Pittu aa’ (Jharkhand), ‘Bodditegga’ (Andhra Pradesh), ‘Mustae’ (Irula community, Tamil Nadu) or ‘Phang’ (Bundelkhand, Central India) the use of the plant as a regular vegetable is quite common. In some parts of Bihar and Tamil Nadu, fruits are eaten raw or cooked. Diversity of cuisines changes with geography. In Vidarbha region of Maharashtra, couple of local delicacies are made from Rivea, commonly known as ‘Masala paan’. People make Zunka, where Rivea leaves are mixed with Tur dal (pigeon pea) and stir fried with onions and besan (gram flour). In Wadisspicy, leaves rolled with gram flour and condiments and finally toasted to prepare the item. Another favorite item is Masala paanachi wadi which can be taken either hot or cold, as a snack or side dish to a meal. Here Rivea leaves are rolled with preferred spice paste and oil fried under the cover of flat bread (Chapatti). The leaf rolls are wrapped into wheat or sorghum chapatti as a snack item. Nutritionally, the leaves are good source of energy and micronutrients, phosphorus, magnesium, calcium and zinc along with good carbohydrate, fat and protein content. Besides, vitamin C, carotenoids and iron are other key nutrients obtained from the leaves.

A thorny shrub with juicy bright yellow fruits, Himalayan Yellow Raspberry is a popular plant among the hill communities of the Himalaya and Nilgiri regions of India. The plant has well known medicinal as well as culinary use. In majority of the Himalayan states and in the Nilgiri region the ripe fruit is a common edible item among the tribal communities. Commonly known as Aakhe, Hisalu (Uttarakhand, Himachal Pradesh), Thuppa Mulli (Tamil Nadu), Aingkhushi, Komrupsiang, Jilyung (Arunachal Pradesh), Borjetulipoka (Assam), and Shiinghoshi, Theimi (Manipur), the juicy fruit is used frequently in the preparation of jam, jelly, smoothie, cake and other home based desserts across the hilly sites. The nutritive value the fruits is high due to the presence of protein, fat, and a lot of minerals, potassium, phosphorus, calcium, magnesium, zinc and iron.

A herbaceous plant with the distinguishing lance like leaves and golden yellow flower bunches, Rumex is commonly available near roadside and agricultural fields. The plant is treated as leafy vegetable in cooked form across the northern Indian states. Commonly known as Kali hulli (Jammu and Kashmir), Bon Chuka (Assam), Torong khongchak (Manipur), Jungli palak or Kukur Jiwba (Jharkhand, Odisha and West Bengal) the plant is either prepared singly or mixed with other vegetables. The recipe is based on boiled leaves in majority of the areas, however, stirred fried preparations are also in use in some communities. It is mostly gathered for domestic use though in Manipur the plant is also available in local vegetable market for general sale.
Nutritionally, the plant is a rich source of Vitamin A and C as well as minerals (calcium, iron, magnesium, etc.). However, over consumption should be avoided due to presence of oxalic acid which can lock up other nutrients, thus causing mineral deficiencies. As a remedy cooked form is preferred to neutralize the effect of oxalic acid.

A common aquatic plant with its arrow like leaves and white flower, Sagittaria is crowded at the corner of the majority of the inland waterbodies across the country. The 3-5 m tall plants are visible for their characteristic broad arrow like leaves that acquired them the popular name ‘arrowhead’. Despite having wide distribution, culinary use is under-documented. The plant is known by different vernacular names to different people like Kere gende (Karnataka), Neetimokka (Andhra Pradesh), Koukha (Manipur), Muya (Odisha) and, Chotakut (Bihar). The culinary diversity is extensively reported from north-eastern region of India especially from Manipur. Ironba, Bora and Kanghu are few of the popular delicacies made from the tuber of the species. Ironba is a non-vegetarian preparation where underground tuber with young shoots is mixed with potato, fish and spices. For Bora, tuber with young shoots is dipped into paste (prepared from gram flour, spices, chili, salt, and ginger) and fried. On the other hand, Kanghu is a fried preparation of tuber with potato and onion. In Manipur, these preparations are popular among locals and considered as delicacy among the tourists. The plant is one of the highly sellable vegetables in local markets and a mean of livelihood for a group of people. In Odisha, Karnataka and coastal Andhra Pradesh tubers are edible in cooked form. A different use, as cooked leaves, has been reported from Bihar. Nutritionally the tuber is enriched with starch, calcium, phosphorus, iron and potassium. It has a good potential for future nutraceuticals with high anti-oxidant activity due to the presence of phenolics. 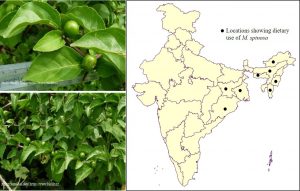 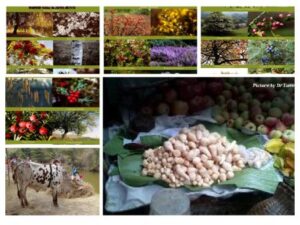 admin
November 21, 2021
Family – Rubiaceae It is a spiny small tree or a large shrub with greenish-white flowers found in the south...
admin
November 21, 2021
Family: Oxalidaceae Commonly called as creeping wood sorrel, the plant with the clover-shaped leaves stays closer to the ground and...
admin
November 21, 2021
Family: Pontederiaceae This aquatic plant is a common weed of the rice fields of India. It is usually seen in...
admin
September 2, 2021November 22, 2021
Avik Ray Centre for studies in Ethnobiology, Biodiversity and Sustainability (CEiBa), West Bengal – 732103, India E-mail: avikray@ceibatrust.org Our imagination...
Anshuman Das
January 28, 2021November 21, 2021
A rainy day of the end of August. Raindrops kept pouring over the green waves of rice fields. It seems...
Avik Ray Rajasri Ray and Sreevidya EA
January 26, 2021March 8, 2021
Physalis minima L. Family: Solanaceae Physalis minima or little gooseberry is one of the common plants in agricultural fields and...