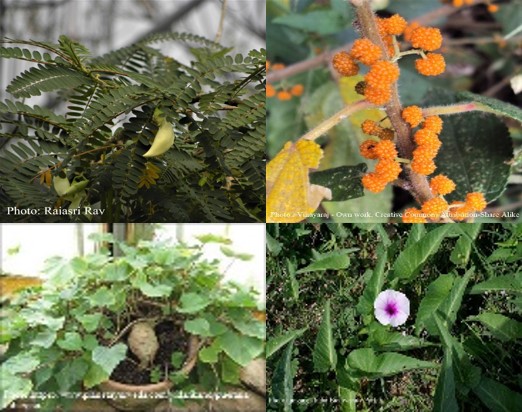 A shrubby plant commonly known as ‘wild rhea’ and is one of the widely distributed members of the nettle family Urticaceae famous for stinging hairs on their leaves. However, this apparently thorny member has wide acceptance among tribal people for its sweet edible fruits. Commonly available in the Western Ghats of Southern India, the ripe fruits (known as Neerinch or Monili) are popular among various tribal groups like, Malmpandarangal, Kattunaikar and Paniyar of Kerala. The plant is known by multiple names Soh-tyrsim, Dalah esing, Madeilo, etc. In Himalayan state of Uttarakhand, the plant is known as Tushiaru and is a widely cherished among local people. Culinary use has also been reported from north-east Indian states of Assam, Arunachal Pradesh, Manipur, and Meghalaya. The fruits can be pickled and preserved in salt, and is practiced by households in the villages of Kerala, especially by people involved in treatment with folk medicine. Nutritional analysis suggested that fibre content in the fruit is higher than common fruits like guava and pomegranate. Similarly, the fruit is a good source for natural anti-oxidants, vitamin C and iron and can be a good dietary supplement if eating raw fruit is popularized at a wider geography.

A common and widely popular leafy vegetable in rural household, the plant with light mauve coloured lower is frequently grows unattended near water bodies or non-perennial aquatic environs almost throughout India. The species, also known as water spinach, is considered as ‘highly invasive’ and grouped under weeds by many nations. The vernacular name Karmatta, Kollamni, Kalmi, Karmi or Kalni saag (saag means green leafy vegetables) is widely known across the West Bengal, Odisha, Jharkhand, Uttar Pradesh, and north-eastern states. In Andhra Pradesh and Telengana it is called as Tuti koora and leaves and young stems are in edible list of the tribal groups like Bagata, Gadaba, Konda dora, Jatapu and others. In north eastern states of Assam and Manipur, leaves, shoots, fruits or whole plants are consumed by the local Shan tribes, Meitei Manipuris’ in boiled form or in light fried format. Wide-availability of the species and its rich micronutrient content, such as iron, potassium, magnesium, and beta-carotene, thus recommended in daily dietary allowance for all categories of people, especially for children and women. 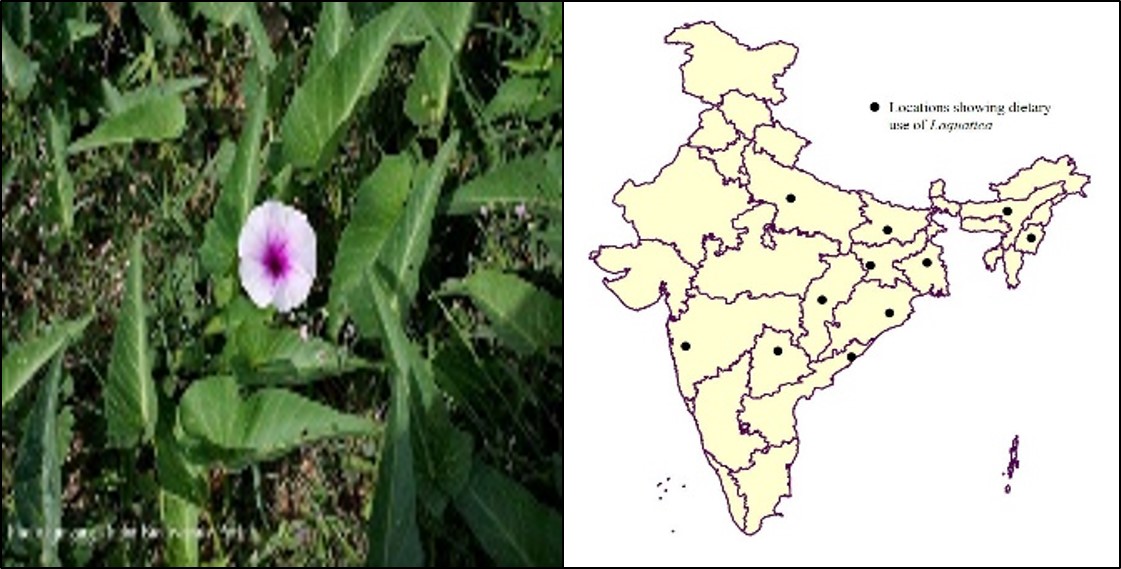 It is a woody climber with bright blue flower and is famous for its underground fleshy tuberous root. Commonly known as Vidarikand, it is one of the popular food items in non-conventional food arena. Communities near Hassan area of Karnataka, southern India, prefer its liquory taste and use the tuber in cooked form as vegetable which they call as Gummadi balli. Its widespread use has been reported from various north Indian states as well. In Bihar (Bankumra) flower and seeds are also eaten along with the tuberous roots. The tubers are also known to the tribals of Mayurbhanj district of Odisha as Bhuni kakharu. Similar trend is observed in Andhra Pradesh where a vast number of tribal groups namely Bagata, Konda Dora, Mali, Kotia and others has this tuber (known as Dharigummadi) in their routine diet. The Gujjars of Uttarakhand and the Vasava tribes of Gujrat use the tubers either raw or in cooked form. Usually unripe tubers are taken in raw form whereas ripe, older ones are often cooked with spices. Like any underground storage organ, the tuber is a rich source of carbohydrate (~64%) and protein (~10%) and demonstrate potent anti-oxidant properties. 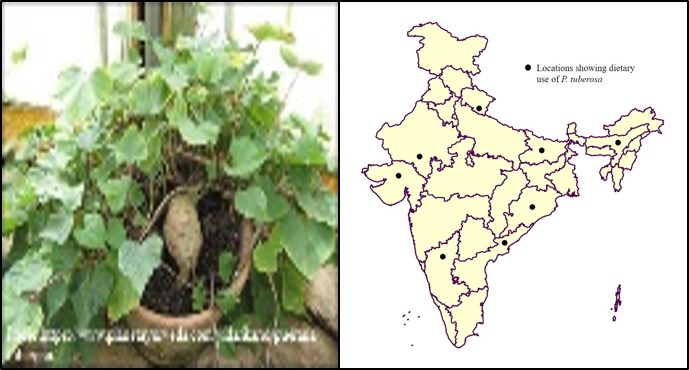 It is a soft-wooded legume with open crown. The plant is very well known in the south of India as Agathi. Usually the leaves are stir-fried when they are still tender and used as an accompaniment with rice or roti. They have a bitter taste and are always cooked with grated coconut in south India. The dried leaves are also used to make tea which has medicinal properties. When the leaves are mature and old, they turn bit hard to chew and then are used as fodder. In the Konkan coast of Maharashtra, the plant is known as Agasty and the flowers and fruits are in regular culinary practice. It is also popular among the Palliyars of Tamil Nadu as young shoots and leaves are used as vegetable. In eastern India, whitish flowers are more popular (known as Bokphul), are fried and consumed in Assam and West Bengal. In Bihar, known as Basna, seeds are quite popular in tribal diet chart. Sesbania grandifora leaves are highly nutritious and have been shown to contain significant amounts of proteins, fat, carbohydrates, fiber, and minerals such as iron, calcium, and phosphorus. The young leaves are edible and are quite often used to supplement meals. The plant has also been reported to be a potent antidote for tobacco and smoking-related diseases.