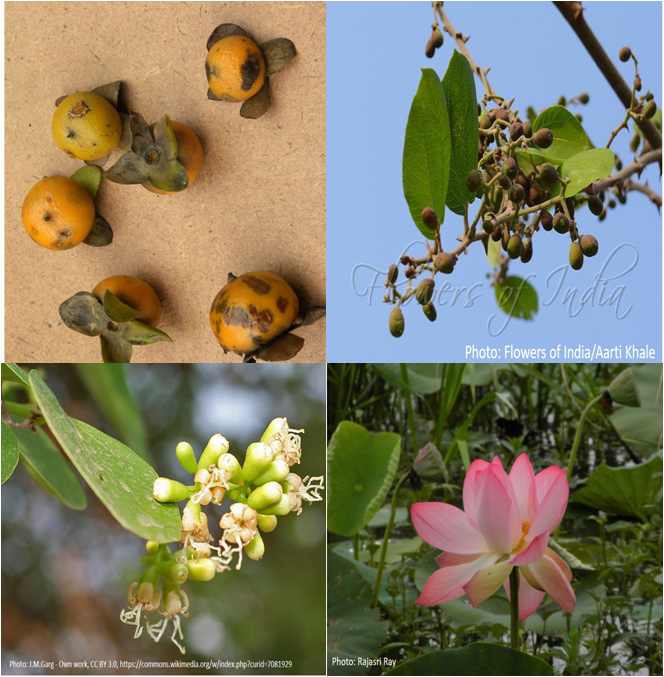 A perennial aquatic herb boasting soft pink flowers does not only soothe our eyes but also fills up our stomach with all edible parts. Like it’s ubiquitous distribution in the stagnant water bodies across the country, it’s culinary tradition is diverse as well. Starting from distant north-eastern state of Manipur, locally known as ‘thambal’ or ‘thamau’ the plant is widely available in local markets as a common food. Down along the river Bramhaputra, the Shan tribes of Assam, living in areas like Golahat, Jorhat, Sibsagar, Lakhimpur, Dibrugarh and Karbi Anglong, use the seeds, flowers and underground parts of the plant. The plant is well known as ‘padumphovl’ in local tongue. In other parts of Assam, it is called as ‘padum’ and even the carpel and petiole of the plant find a place in the plate. In Uttarakhand Himalaya, the plant is cultivated in ponds up to 1300 m altitude and fruit is a popular local food among the peasants. The culinary use from the local communities has been reported from Bhadrak and Mayurbhanj districts of Odisha. Locally known as ‘padma’ or ‘kaani’, the rhizome is used as vegetable and seeds are eaten as raw. In coastal Andhra, the tribes especially living in the Vizianagaram and Sreekakulam district (Bagata, Konda Dora, Valmiki, Konda Kammara, Mali, Kotia, Khond, Jatapu, Muka Dora, Gadaba, Porja, Khond and Savara) call it ‘kamalam’ or ‘thavare beru’ for the rhizome and use it for edible purposes. The shoot of the plant well

known in Tamil Nadu as ‘thamarai kizhangu’ is a delicacy and is used to make chips. It is especially popular among the ‘Tamil Brahmin’ communities settled across Tamil Nadu, parts of Kerala and other parts of the country. The lotus stems are cut into round pieces, marinated with chili powder and salt, dried well and fried whenever required. The product can be stored in airtight containers for longer periods. The local people of Karnataka, Tamil Nadu and some states of north India cut and stir fry the lotus roots and stems. Lotus stem and root recipes are very much available in popular websites. However, there is a misconception of availability of puffed lotus seed in market. The item sold as ‘puffed lotus seed’ is actually the seed of fox nuts (Euryale ferox) or Makhana which is an edible aquatic plant also known as a highly nutritious food. 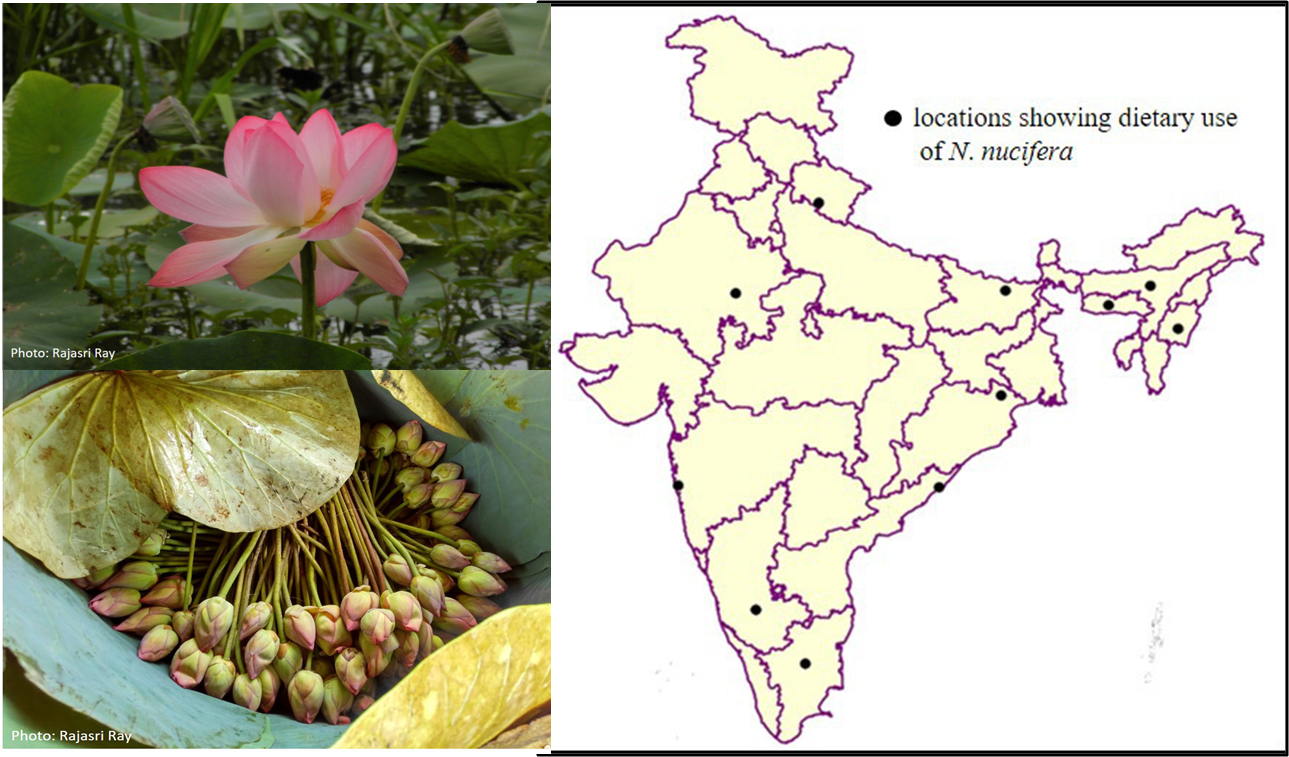 It’s a highly drought tolerant tree found across India and is famous for the leaves used to making bidis (poor man’s cigarette) by wrapping tobacco dust inside the leaves. The plant variously known as Tendu, Timru, Kendu, Kinnu in different parts of India. The tree is also called as ‘beedi mara’ (beedi tree) in the southern parts of India. The abundance of the plant throughout India allows easy collection of its produce by a plethora of forest-dependent tribes. Collection of leaves during summer months has been a prevalent practice. But, it is also valued for its sweet fruit that the tribal communities like Vasava, Oraon, Kondh, Santal, Saora, Kolha, Munda, Juang of Jharkhand, Odisha, Chattisgarh, Gujarat eat raw or cooked. In Rajasthan, the underground parts are also in use. The sweet fruit is also very popular among the large bands of gatherer tribes, such as Gonds, Muria, Abhoj maria, Kawars, Nagesia Pando, Majhwar and Khairwar communities. Forest people use this fruit to beat intense summer heat, and it is believed to boast their stamina to work for long hours.

Apart from eaten raw, there are many local delicacies, such as Tendu-Seeta. It is a pudding  prepared from the fruit that is quite famous around Chhattisgarh. Similarly, wine from tendu fruit is also popular among tribals which supposed to have anti-oxidant activity. Recent studies suggest that tendu fruit is a low glycemic fruit and can be a potential replacement of sucrose in sweet beverages. 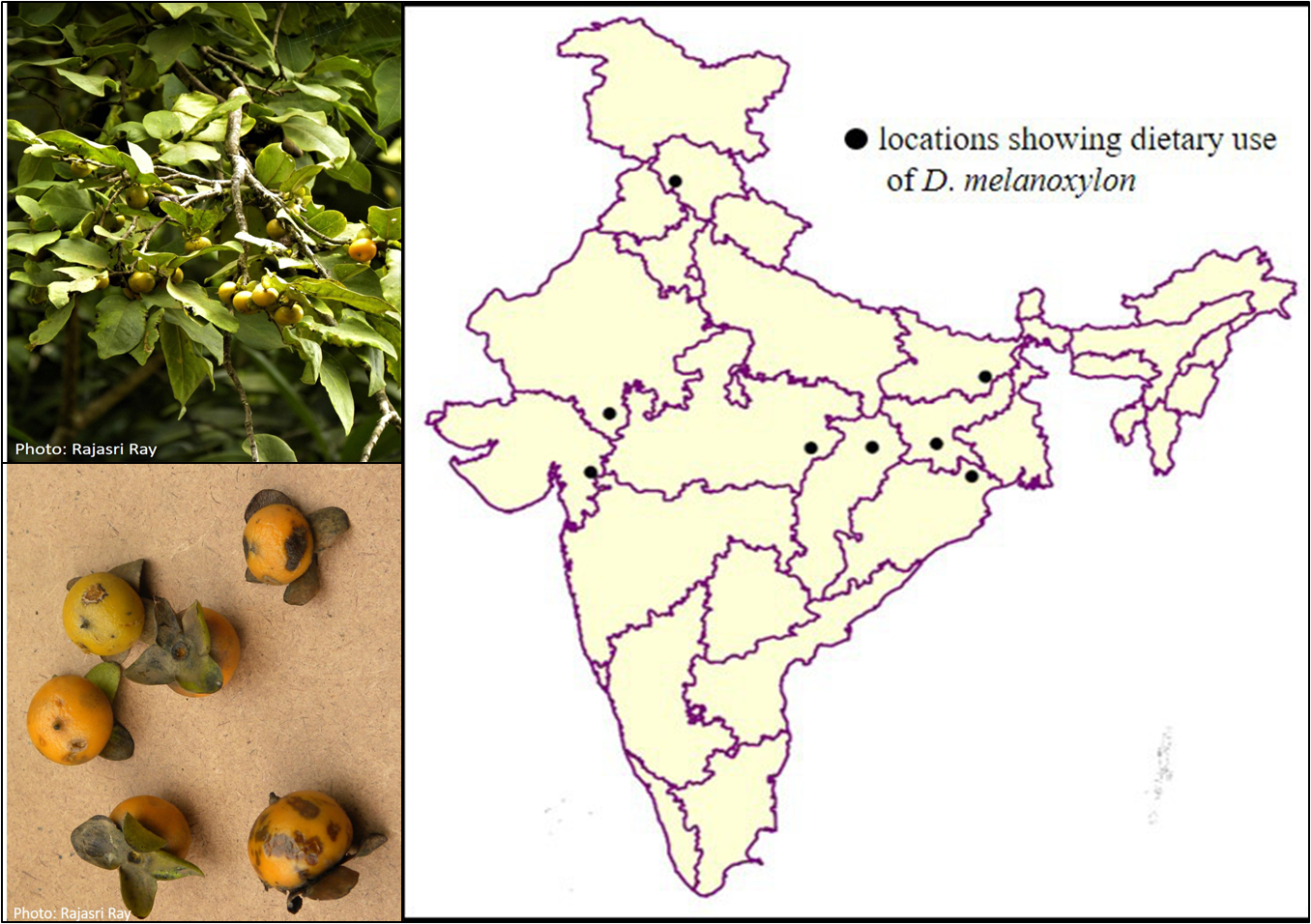 Ziziphus rugosa or zunna berry is a thorny forest shrub species widely distributed across India and elsewhere, and very popular among the tribal communities for its ethno-medicinal importance. The berry fruit is also known for its nutritive properties, commonly known as ‘famine food’ as it has a great use in lean season when conventional food resources are dried up for forest people. The fruit is eaten raw or pickled for consumption with rice. Known as bon bogori or dindao bogori in Assam, the fruit is popular among the Shan tribes, who also use leaves and young shoots as vegetables. In Meghalaya, it is known as ‘dumakphul’ among the Garo and Khasi tribes. In south-eastern state of Odisha, tribal groups like Kondh, Santal, Saora, Kolha, Munda and Juang consume the raw fruit as a source for nutrients. Down to the South, Toda, Kota, Kurumba, Paniya, Irula, Kattunayaka and Badaga communities of Nilgiri hills and Kadar tribe of Vazhachal area of Kerala eat the fruit as nutrient source during summer.

In rural south India, the fruit has use in juice, for that the fruit pulp is mixed with water and sugar to prepare juice. Whereas the ripe deseeded pulp is mixed with wet rice and salt for making Dosa. The mixture is kept for fermentation overnight and then is used for preparation of Dosa. The bark is also used to brew local alcohol. The plant is yet to find its way to the urban dining tables. 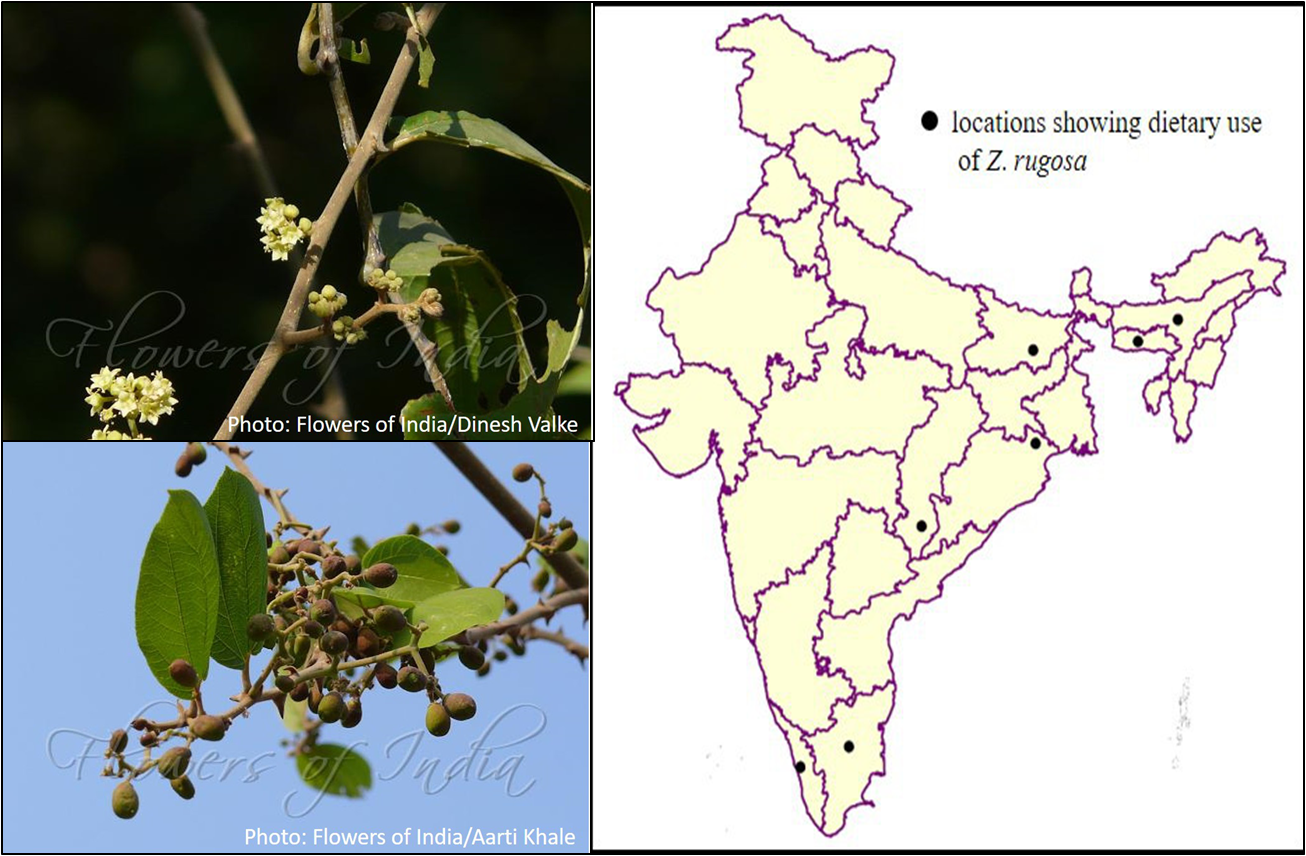 It’s a medium-sized deciduous tree with drooping branches and is very common in a variety of forests from the dry deciduous types in Rajasthan to the moist deciduous forests of the Western Ghats. Known in various common names, such as Indian cherry, fragrant manjack, cummingcordia, glue berry, pink pearl, bird lime tree, and so on. In Gujarat, the fruit is called gunda and used as vegetable or as pickle. It is mixed with salt and red chili powder for making pickle. The pickle made from the young fruits is a delicacy in the states of Assam, Uttarakhand, and Odisha especially among the tribal groups. Gunda fruits are also used for making chutneys which is popular in Andhra Pradesh and taken along with rice. The plant is well known among the tribes as Pedda irki and Pedda bothukku. Others, e.g., Gonds, Koyas, Konda Reddis, Kolams, Naikpods, Pardhans, Thotis, Mannewars, Dadve, Gowari and Raj Koyas use the yellow glossy fruits of the plant as food. The tribes like Kondh, Santal, Saora, Kolha, Munda, and Juang of Orissa call it gual koli and eat even the leaves and shoots of the plant along with the fruits. They also find uses for the gum obtained from the tree. Many tribal groups also consider the bark as edible. Gunda is having an anti-diabetic property, used against colic pain and chest pain. Ayurveda calls it ‘shleshmataka’ as it expels phlegm. The fruit though very popular among the rural or forested parts has not reached urban or peri-urban areas likely owing to a lack of formal production. 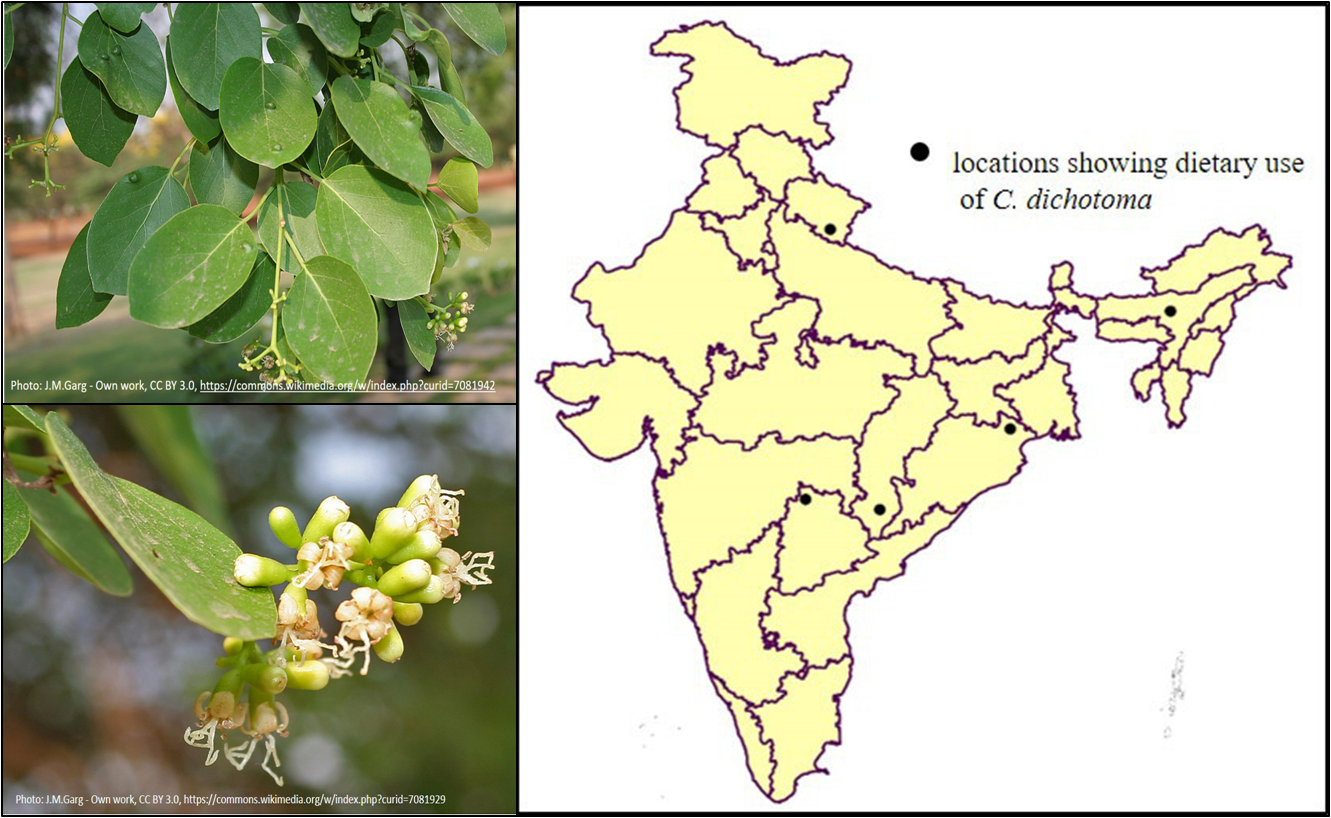