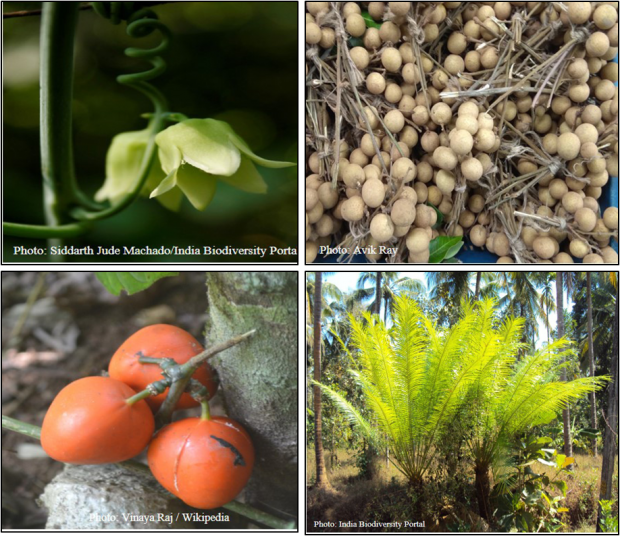 Kalasin Province, the largest and poorest part of Thailand, is located in the Korat Plateau. In a sleepy village of the province, Watcharapong wakes up in one early morning, goes out to the forest to grab some Phak saap or Nang noon (local passion fruit – Adenia viridiflora) from a nearby tree of the forested patch. These give him vital support during his untimely hunger pangs. Fresh harvest from the plant is a boon from mother nature. Now travelling twenty-five hundred kilometres away from Watcharapong’s shelter, there awaits another story. We shall meet Rabeya of a nondescript village near Fulbaria in Mymensingh district, Bangladesh takes her winnowing basket (Kulo) to collect and segregate some dheki shaak, or bathua as her leafy green to supplement her luncheon. She has already sent her son to the local Jheel (small water body) to get some shaluk (water lily or Nympahaea nouchali leaves and tubers) that makes a tasty side-dish. Further away, tucked in tree canopies of the forested land of Abujhmar, that falls in the Chhattisgarh state of India. Gonds, Muria, Abuj Maria are the aborigines of this region for time immemorial and they rely on jungle food. Many a fruit they gather, tendu (Diospyros melanoxylon) is one of their major harvests, they also collect tendu leaves but for making bidi – poor man’s cigarette. So, it is not an unusual encounter with a gathering person in rural south or south-east Asia, who used to spare some time from daily chores to browse and collect wild and uncultivated plants from a solitary tree, or from nearby forest patch, fringes of agricultural fields, or from homesteads.

A rich biocultural heritage also implies a diversity of means to explore and utilize the natural resource. A great leap from one cultural geographic region to another may or may not change the species assemblage, but the practice of wild edible harvest prevails across countries and continents, Asia to Africa and so on. Unfortunately, gruesome debates in academia that often focus on food production indulging on formal agriculture but largely ignore the ubiquity of wild food spectra. While they are an alternative and low-cost source of calorie and nutrition, especially for economically down-trodden groups. Thus, still could be a ray of hope for many and reserves an untapped potential to nurture that has not been fully realized in our food policy.

Perceiving the utmost necessity of this topic on food security, we introduce an additional section from this issue that takes in various wild and uncultivated food plants. We wish to engage our readers with the various kinds of wild food; by wild food we mean they are not under formal cultivation, but may be under minimal management and have been consumed for generations. Our research suggests there are more than thousands or so edible plants in India utilized locally or regionally or even across much broader geographic realms. It underscores the exercise of eating wild food has not been a sporadic habit, but ingrained in our culture. We also observe significant sharing of our traditional wisdom related to wild edible gathering among communities perhaps owing to cultural diffusion. So, let us celebrate our knowledge of nature, natural resources, and its sustainable use.

A woody climber from the family of much familiar ‘Passion fruit’ that crawls over other trees and refuges a plethora species including caterpillars of many butterflies. It has palm-shaped leaves with large circular sessile glands between the lobes. The roots are tuberous in nature, though toxic, possess medicinal properties. This scrambling plant is usually found in the deep interiors of the semi-evergreen and moist deciduous forests of the Western Ghats of India and Sri Lanka. The tribes of Pania, Mullukuruma, Kuruma, and Kattunaikka use the leaves, cook with other greens and consume it. The shoots are also eaten but the flowers as food have not yet been checked out. Though the tribes regularly use the leaves for cooking the importance of the plant as a food substitute is not popular. The commercial cultivation is also another less-explored area. The remotely distributed plants in the deep forests of Western Ghats limit the usage as it demands arduous walks from the tribal settlements. In India, the culinary use has been reported from the Hassan district of Karnataka and the Wayanad region of Kerala. The plant is known as ‘vidari’ in the Karnataka region and ‘Koombi chappu’ among the tribes of Kerala. The wild food enthusiasts and chefs may use the recipe of the tribal people as the base for further innovations as the plant’s medicinal and healing properties especially as a pain reliever have been well recognized in Ayurveda and Folk medicines. 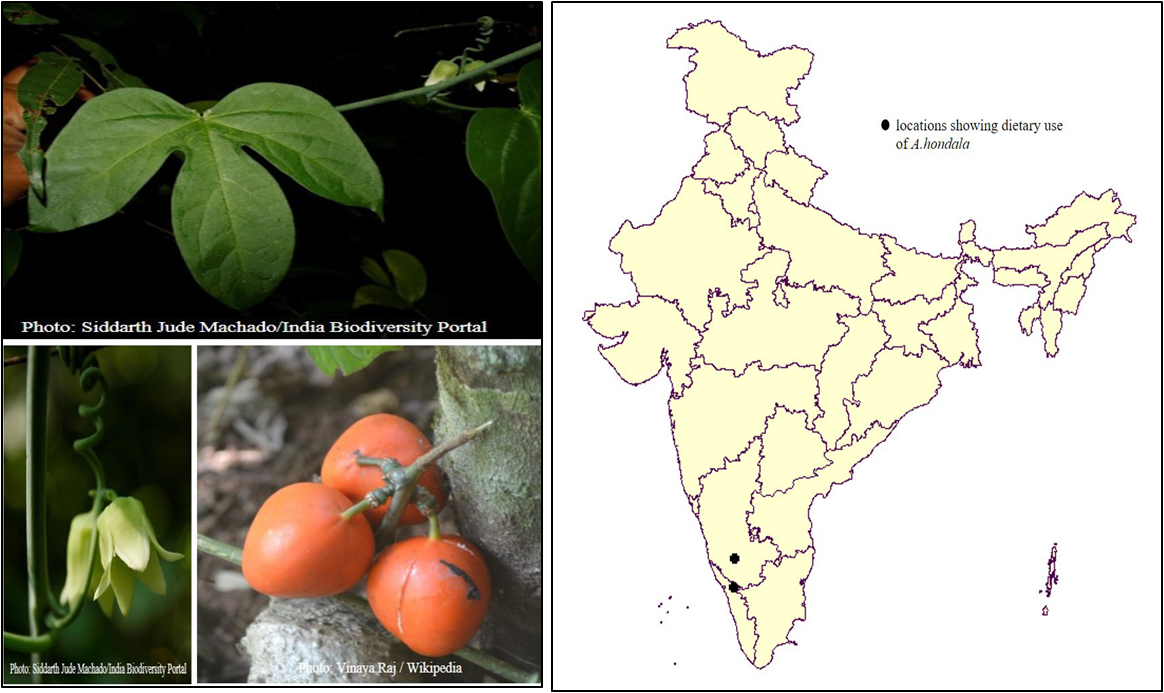 Commonly known as ‘Cycads’, they are little different from our flowering neighbours as they belong to a primitive group of plants, i.e., gymnosperms who came relatively early on this earth. Cycads are quite common ornamentals in urban gardens but one of them Cycas circinalis is conspicuous in the traditional diet charts. Endemic to peninsular India, this plant is distributed in the states of Kerala, Karnataka, Tamil Nadu and in the south of Maharashtra. The plant is popularly named as “Queen sago palm”. The flour, prepared from the dried seed, is commonly known as “eenthakka podi”, a popular substitute of rice flour among the indigenous communities in Kerala. In Pathanamthitta district, endosperms are separated from seed, dried, and powdered to make flour for preparing various delicacies. Moreover, the Kadar tribe of Thrissur uses the underground part (“Eenth”) as food. Irulas of Pillur valley, Tamil Nadu, use the tender leaves and shoots as a vegetable (known as “Enthu”) in their daily food intake. The same habit is also found in Palliyar tribe of Madurai and Tirunelveli districts of Tamil Nadu, where the plant is known as “Paereenji”. The plant is a forest dweller therefore, naturally propagated, but habitat destruction and rampant bark extraction pushed it to the endangered category. Till date, no organized cultivation for the plant has been reported. A recent initiative is taken by CSIR-NBRI, Lucknow for Cycad species conservation in India by establishing Cycad Conservation Centre at CSIR-NBRI Botanic Garden. 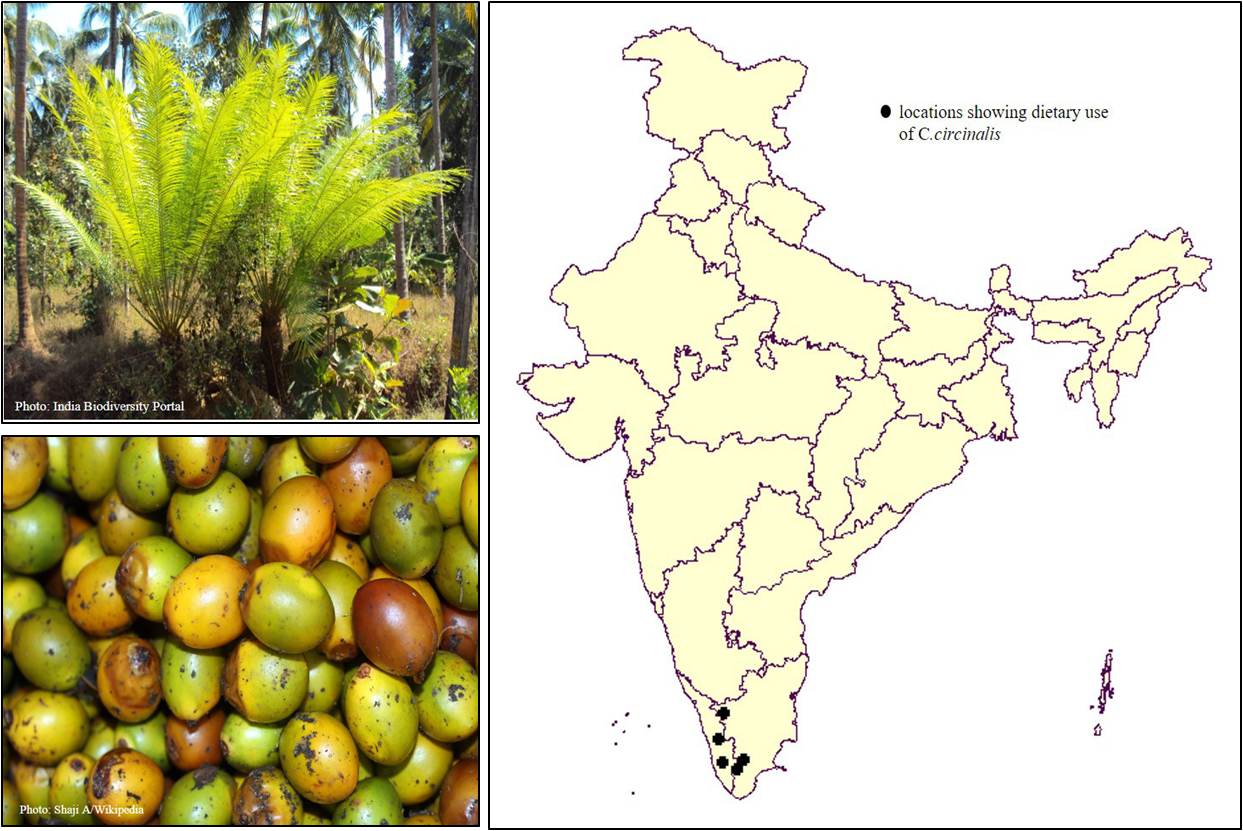 This giant grass family member belongs to the great league of ‘bamboos’. Interestingly, it is also infamous in other names, such as male bamboo, Calcutta bamboo or solid bamboo perhaps indicating its sturdiness. Although the plant has been highly valued for making house frames, tent poles, scaffolding, bullock carts, and fences its various edible parts, young shoots, seeds, flowers, underground parts are popular among the tribes and non-tribes alike. The tribes like Gond, Kawar, Nagesia, Oraon korwa, Pandokodaku, Khairwar, Majhwar communities of Chhattisgarh use this plant for the edible leaves and shoots. The plant is called as ‘bhans’ in this area. In the Mayurbhanj district of Orissa, the tribal groups like Santhal, Kolha, Bathudi, and Gond use the leaves, seeds, and shoots as a good source of nutrients. The local names include dongri bans, salia bans, banso, and bans. In Uttarakhand, especially in the Lohba range of Kedarnath forest division in the Garhwal region the flower and the underground parts of the plant are also used among the local communities. Young shoots are cooked and consumed widely in Coorg and Malnad region of Karnataka. The shoots are steamed and salted to be eaten raw. Pushcarts filled with the delicacy are a very common scene in many parts of South India. The food from bamboo remains incomplete without a word about north-eastern India. Perhaps most widely referred use of bamboo is from the seven sisters of India. Assam, Manipur, Meghalaya, Arunachal Pradesh, and the rest of the other states have their variety of sumptuous dishes from young bamboo shoots.

The seeds are used to substitute grains especially when you are keen on your calorie intake. These are used to make a variety of dishes where rice is used. The ‘kheer’ made using the seeds are available across the restaurants of Kerala and is very popular during the harvest festival ‘Onam’. The ‘payasam’ is made using jaggery and milk along with Dendrocalamus seeds. In addition to this, the rural places of south India bake rice with coconut to make steamed cakes or ‘puttu’. Nowadays, being a trendy food it is available in many e–com platforms, organic shops, and dishes are common in many cafeterias in south India. 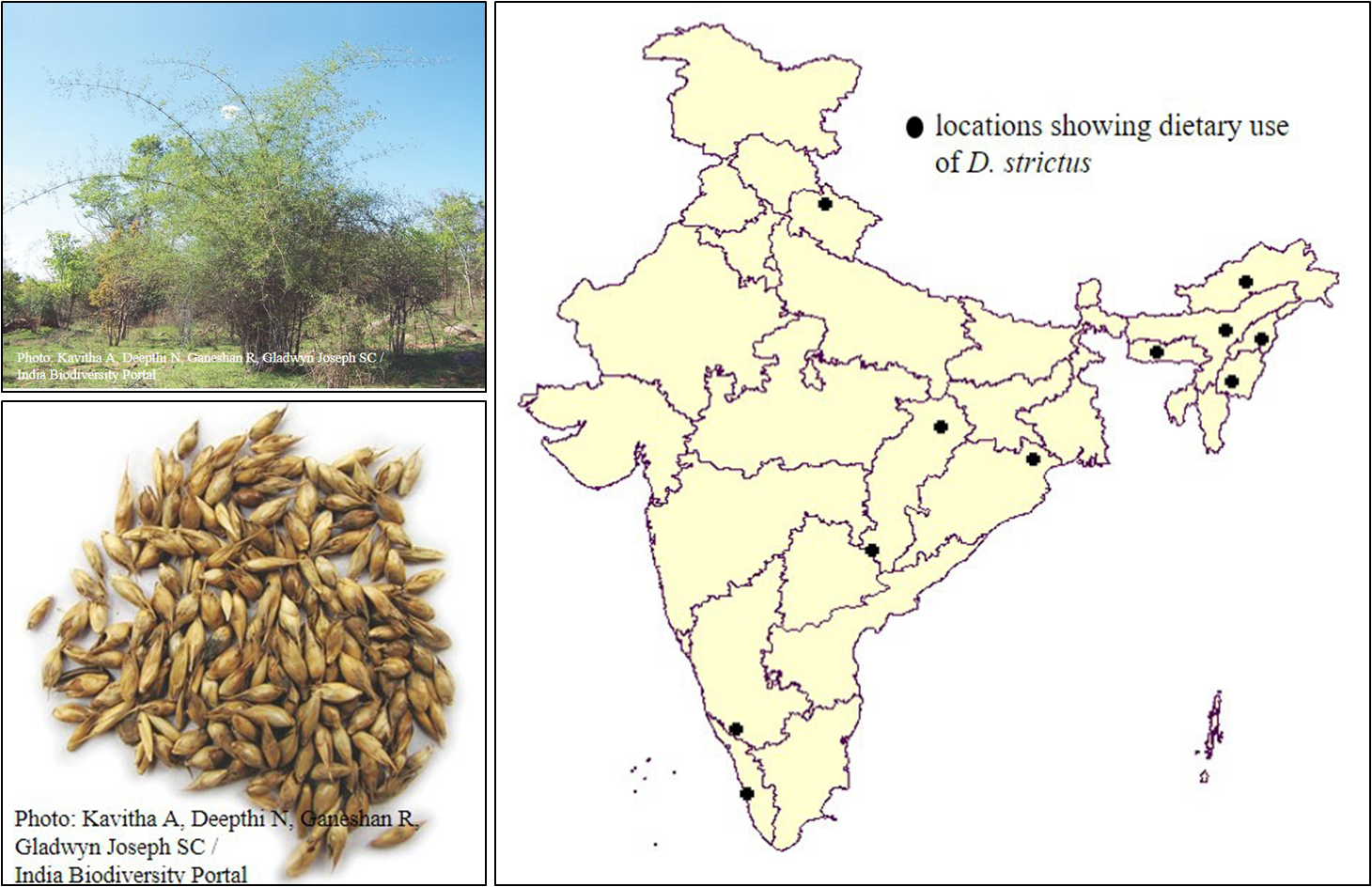 A small yellowish fruit, a litchi in disguise, that may confuse many. Yes, its resemblance to litchi has earned him adorable names, Naga Lichu, Tokra, Kath lichu and Mirgoch among the locals in the state of Assam and in Garo Hills, Meghalaya. In West Bengal, the fruit has a local name as Aansphal, a common surrogate of litchi. The fleshy aril is also cherished raw by the locals of Uttara Kannada, Karnataka. Dimocarpus longan, commonly known as Longan, is a tropical tree of soapberry (Sapindaceae) family that also includes its close kins e.g., litchi, rambutan, korlan. The plant is common in tropics of South Asia and the fruit has white fleshy aril sweeter than the common litchi. The black seed peeps through the white flesh and looks like a pupil and so-called ‘dragon eye fruit’. However, largely owing to rampant logging in recent past the natural populations have dwindled to a great extent and it is now near threatened, although informal horticulture is practised at many places. History says that certain cultures have a long tradition of use (especially in China) but its wider acceptance has begun only recently. There are a few farmers who cultivate these fruits in the southern part of India as the fruit is used for treating insomnia, stomach pain, and dementia. Regarding the increasing cultivation area and increasing quantity of longan fruit, attempts have been taken in India as well. In the northern Bihar, longan cultivation has been started experimentally in Minapur, Mehsi, and Kanti among litchi growers. The modern culinary experts even use the fruit in dried, canned, and other processed forms. The dried flesh of the fruit is available in all supermarkets in India or via e-com stores serving processed foods. 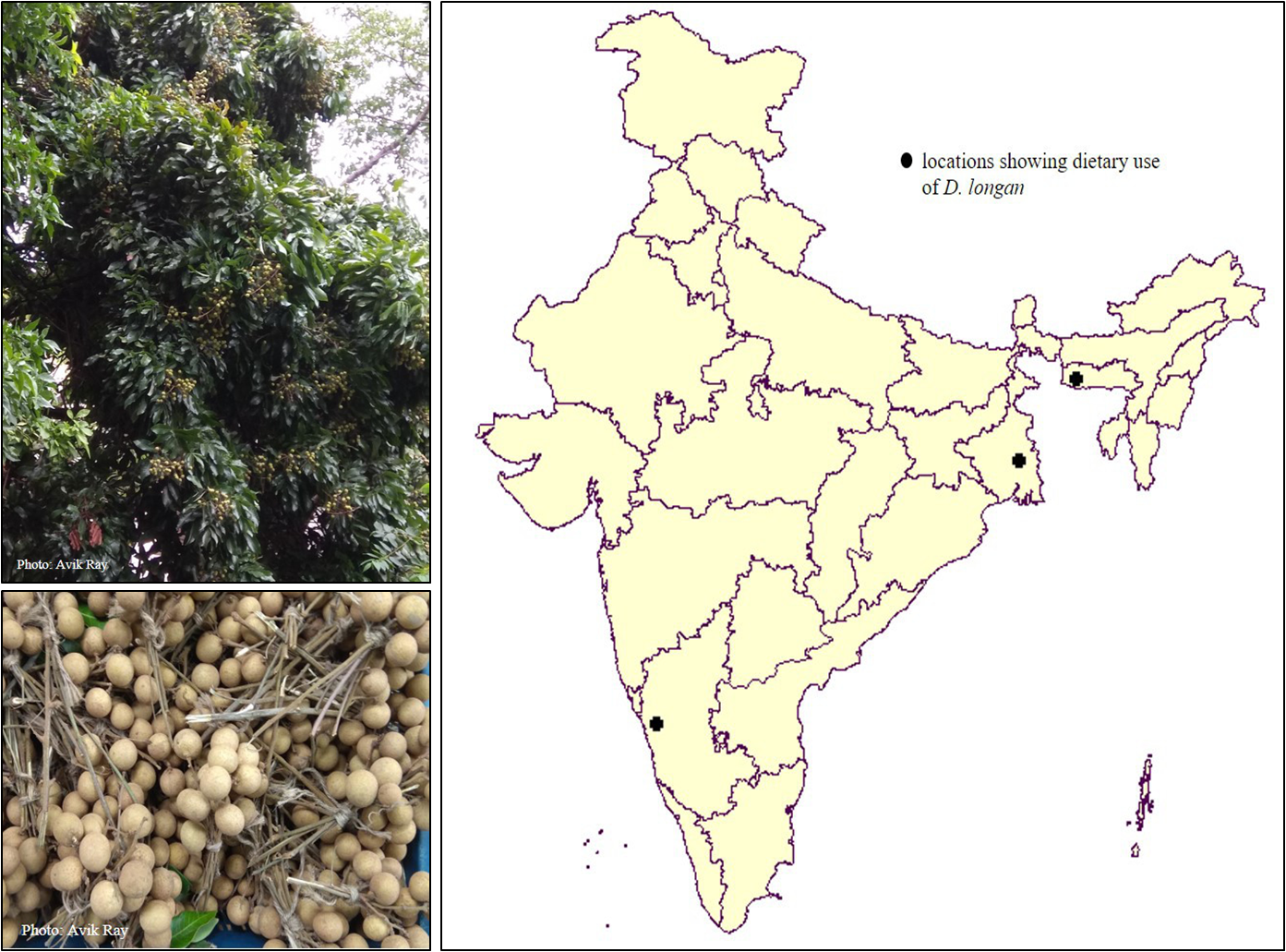 Posted On March 7, 2019 ~ 0 Comments
Kalasin Province, the largest and poorest part of Thailand, is located in the Korat Plateau. In a sleepy village of the province, Watcharapong wakes up…