Early humans had no dearth of creativity. And surprisingly, it was not only limited to creating physical objects, from finest artifacts, pottery, sharpest spears or hand axes, ornaments, numerous material objects of daily chores to awe-inspiring tombs, monuments, or kings’ palaces. Ancient hybrid animals bioengineered by humans are another example of their biological craftsmanship!

Well! We have heard a lot about mules (produced by mating donkeys with horses), tigons (Tiger X Lion), Dzo (Cow X Yak), Coywolf (Coyote X wolf), and so on. KUNGA or an ass-donkey is a recent addition to this list. It is an old beast and is the earliest known hybrid animal bred by humans. The second oldest hybrid was an Anatolian mule that existed about 1000 B.C. Kungas were F1 hybrids between a donkey and a hemippe or a type of Asiatic wild ass that went extinct in 1929. It has been discovered that the kunga’s mother was a donkey and its father a hemippe. Like mules, kungas were sterile which means they cannot interbreed and it was absolutely necessary to impregnate a female donkey by a Syrian wild ass every time for a new baby kunga to be born. This unique and ancient equine from the region of Syro-Mesopotamia roamed around 4,500 years ago, making it the oldest evidence of human-created hybrid animals.

Intriguingly, horse-like animals are often found in artworks and referenced in clay tablets predated horses by centuries. Perhaps, they had existed even before horses  were domesticated in Mesopotamia. So, the questions
popped up in the minds of the researchers: what were these powerful animals? Why they were so frequently present and how were they employed? 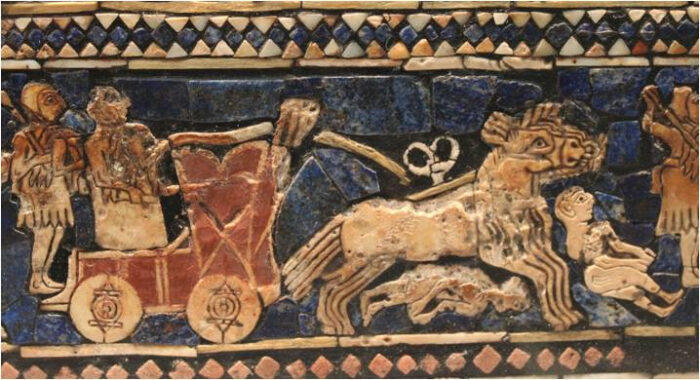 quests. The researchers say that the size, power, and agility made them more sought-after war-animals than asses for the towing of large four-wheel war wagons that predate horse-pulled chariots. Whereas, smaller-sized males and females kungas were used in pulling ploughs in agricultural activities. It appeared like these hybrid animals might have offered some advantages that people looked for. Persuading donkeys into war-like dangerous situations is hard and no Asiatic wild ass can be tamed for their aggressive nature. But super-costly and large-bodied kungas were useful to pull the vehicles. But kungas were rare since Syrian wild asses (or hemippes) were difficult to capture and breed. Researchers predict that they were possibly bred at Nagar (an ancient city in modern-day Syria), whose rulers also provided them as gifts to the elites of the allied territories. An earlier study claimed that domesticated horses were introduced into the southern Caucasus and Anatolia at the end of 3000 BC. So, the timeline makes kungas a forerunner of the domesticated horses and demonstrates that the production of early
bioengineered organisms was a kind of ancient biotech industry.