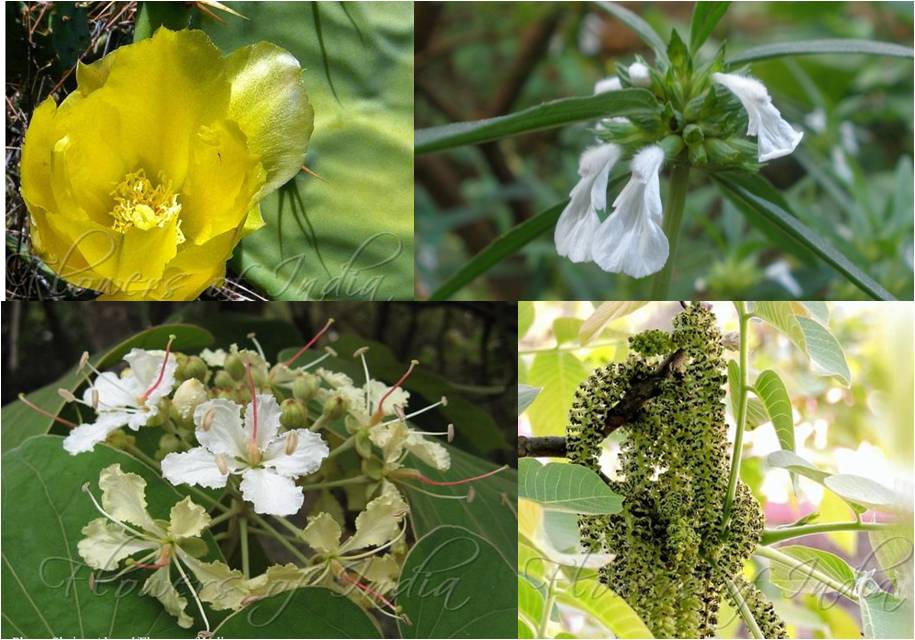 This plant is a crawling member of the upright and prodigious Gulmohar family and ranks as one of the largest creepers in India – is also known as ‘maloo creeper’. This creeper is found across the country and considered as an enemy of its refuge trees. The strong and woody stem can grow into a huge creepy giant, reaching up to 30 m long and 20 cm thick. Other than its ornamental value, the tree is well utilized throughout India for its edible part, i.e., seeds. Traditionally, the seeds are roasted and eaten or often used as a pulse substitute. It is well-embraced in dietary use among the tribals across India from Gujarat to Manipur, Uttarakhand to Andhra Pradesh including central and east Indian states. In addition to the seeds, the flower bud and stem bark have some food value and relished in Bihar and Gujarat. Also, tender young pods and leaves are used as vegetables. Research shows that seeds power-packed with lipids, essential amino acids (isoleucine, valine, histidine, leucine, phenylalanine, lysine and tyrosine) and minerals (nitrogen, calcium, iron, magnesium). Perhaps, this gigantic creeper has not reached common households owing to limited efforts towards domestication and cultivation.

Although commonly known as English walnut or Persian walnut the plant is widely distributed in the Himalayan states of India. Walnut kernels are very popular as dry fruit across India and abroad alike. The nut is culturally well-embedded in the dietary habit of the hill communities of Uttarakhand, Himachal Pradesh, West Bengal, Assam, and Manipur. The kernels are rich in omega-6 and omega-3 polyunsaturated fatty acids (PUFA). Besides, phytosterols, which help in lowering total plasma cholesterol and low density lipoprotein, are also present. Studies also unearthed the presence of many essential minerals (calcium, iron, magnesium, sodium), vitamins (A, C, E and K), and proteins. Walnut is classified as an important species for human nutrition owing to high protein and oil contents and made its entry into the FAO list of priority plants. Though the traditional recipes of walnut are yet to seep into the Indian kitchens, several attempted the use of walnuts in laddus (the nut is mixed with dates and other dry fruits and made into balls with ghee), but short shelf life of the delicacies remained a major problem. The use of the nuts in place of other popular nuts like peanut or cashew is not yet explored perhaps due to limited production. But the nuts are trending well in online stores and supermarkets as the culture of consumption of raw and processed nuts shooting up rapidly.

This herbaceous plant is very common, grows rampantly in open-spaces showing off its tiny white flowers, and considered as a ‘weed’ in many parts of the country. It is herbaceous and grows up to 15-60 cm with linear leaves and white flowers. It is colloquially called as drone pushpam, gophaa, chhota halkusa, thumba, ghal ghase or thunni in different cultural geographic regions. In the south of India especially in the states of Tamil Nadu, Andhra, and Kerala, the leaves and flowers are made into a paste with tamarind, lentils, and red chilies to accompany sumptuous dosas and idlis. The flowers are used to make ‘ada’ – a delicious south Indian version of crepe or pancake. Some modern culinary specialists advocate the use of the decoction of the leaves with ginger in the form of gravy due to the anti-oxidative properties of the plant. Like southern part, the plant is also very popular among peoples of the north and north-east states of India. Leaves and shoots are used as vegetables either boiled or consumed with spices among different tribes. Nutritional evaluation revealed the plant is loaded with multiple key vitamins (ascorbic acid, riboflavin, thiamin, niacin and beta-carotene), minerals (calcium, potassium, magnesium and phosphorous) and micronutrients (manganese, zinc and iron).

The plant is different from the common prickly pear (Opuntia indica), bears strikingly bright yellow flower and can be found along the coastal regions and beyond. Owing to its resemblance with serpent head, it is called as naga phana, but also known as sappathi kalli, chorhathalo, etc. The plant bears alluring red fruit conspicuously seated on the modified stem (cladode), the fruit is a popular item among tribals of Tamil Nadu, Andhra Pradesh, Karnataka as well as in Bihar. Studies say that the juice of the cactus plant possesses many curative, i.e., anti-allergic, anti-oxidative and anti-carcinogenic properties. The young tender shoots (cladodes) is fortified with high amount of macro minerals like, potassium, sodium, magnesium, calcium and phosphorous along with important micro minerals (e.g., iron, zinc, copper, manganese). Fruits too have high nutritional value as they are rich in vitamin C, E and beta carotene, protein, fats, minerals (potassium, magnesium, calcium, phosphorous) and amino acids (proline, taurine and serine). Nutritional beverages from the plant (along with papaya and mango) shows promising anti-oxidant activities and act as a potential energy booster. Initiatives for traditional food preparation using the fruit have been gathering pace (e.g., jam, juice, nectar, juice concentrate, and syrup). Although the cultivation and processing of the plant have already gained popularity, a large majority is unaware of the nutritional benefits of the plant thus left under-utilized.