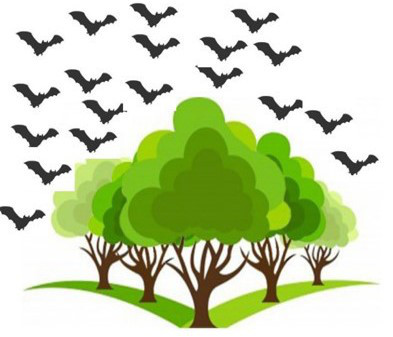 Few weeks back I returned home to the whimsical December chillness of South Bengal and was immediately absorbed into anxious addas centered around the recent surge in an unpredictable weather pattern and our role in it. It seemed that many of us have finally awakened to the present and clear danger of climate change, a phenomenon which in its original form has over the course of the history of life on Earth shaped its trajectory and diversity, but in its present form threatens to obliterate a huge fraction of life forms and possibly endanger existence of the human species as well. The human civilization, specifically in the past few centuries has directed an unprecedented onslaught on its surrounding environment, forcing the most drastic pattern of climate change. As a consequence, we are experiencing the sixth mass extinction in the history of life on Earth (Dirzo et al. 2014).

As we witness our environment crumbling under the sheer pressure of the human civilization, we are yet to fathom the rate and scale of the disaster which we brought upon life-forms. Few indirect references point towards the ominous signs of the link between urban civilization and endangerment or extinction of wildlife (McKinney 2002). For example, industrialization led to warmer climate which in turn rises temperatures in the poles causing the melting of ice sheets. Inhabitants of the polar regions like the polar bear and penguins, now face alarming levels of food scarcity (Hunter et al. 2010; Jenouvrier et al. 2014). Due to lack of arctic ice, polar bears often have to cover exceedingly long distances in search of prey. Similar is the fate of penguins who face heightened mortality due to exhaustion, fast depleting prey base and lack of suitable nesting sites. Wildfires rage in Australia, Europe and North America, fanned by historically high temperatures, and resulting in mass mortality of wildlife in heat waves as well as wildfires. Closer home, weather patterns are growing erratic, rising sea levels threatens the Sundarbans and warmer temperatures aid the spread of tropical diseases, further adding more gloom to our already miserable existence (Patz et al. 2005). For humans, in a nutshell, life is becoming harder and many of us are in the danger of becoming climate refugees in the near future. The financial burden of climate change is almost insurmountable, but a spectacular lack of public awareness and political will across the globe has ensured that we remain mostly illiterate when it comes to securing the future of our generation and that our progenies. The signs are so overwhelming that we can no longer sit back and sigh over a cup of piping hot tea because there may not be a tomorrow to save.

Climate change is here and we need to act fast and act now. However, any action grows upon informed decision making. Hence in this primer, I will elaborate a little about our scientific knowledge of effect of climate change in wildlife. I will expand this column further in future to add more dimensions of climate change and reveal how our survival in completely entwined with our environment.

The earth has experienced repeated episodes of climate cooling and warming over its history of billions of years. These earth-historic events of climate change remain one of the most critical factor that has shaped the trajectory of life in this planet (see Garg 2019 for a more nuanced understanding). While fossil records were the mainstay of scientific research to understand species extinction, high-throughput contemporary technologies of genome sequencing and exhaustive bioinformatic tools have provided some excellent discoveries that not only complements fossil data but also greatly advances our knowledge in ways that we could not know by traditional methods. The Genome of an individual is like the core database and the blueprint of our biological identity. In simple terms it represents the total DNA that is stored in each cell of our body. Genome sequencing technologies aim to sequence a genome to its entirety, and the resulting data requires hundreds of Gigabytes to Terabytes of computational space and specialized computers like servers and workstations for analyses. This fast-growing set of big data when analyzed by extensive bioinformatic and statistical protocols (each analysis often runs for several months), has already returned startling information about the biotic response to past episodes of climate change. For example, we now know that endangered mammals, specifically carnivores mostly fared badly in response to earth-historic climatic fluctuations in the Pleistocene epoch (~2.58 million years ago – ~12000 years ago), specifically during the period comprising of the last documented episodes of climate warming (Last Interglacial, around 110,000 to 130,000 years ago) and climatic cooling (resulting in the Last Glacial Maxima around 18,000 years ago) (Kim et al. 2016). 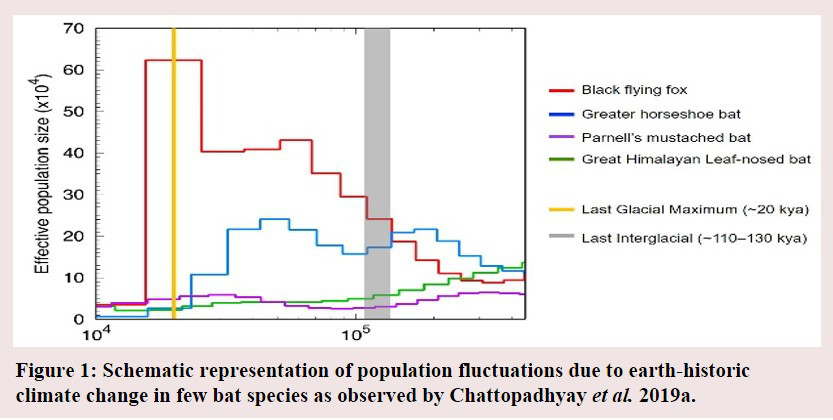 Many species of birds, specifically endangered ones reacted strongly to climate change with their populations fluctuating in response to changes in global temperature and sea level (Nadachowska-Brzyska et al. 2015). However, the most extreme examples are possibly exemplified by the fate of bats, who regardless of being commonly occurring or endangered, seems to have been profoundly affected by the historical events of climate cooling and warming (Chattopadhyay et al. 2019a) (Figure 1). A recent collaborative study led by this author observed that most study species of bats entered the present epoch of warm climate that is the Holocene (~11,650 years ago) with a historically low effective population size (Chattopadhyay et al. 2019a) (Figure 1).

Their responses to earth-historic climate change seemed to be influenced not only by available habitat but also by their biological traits like body size and capability of long flight (Chattopadhyay et al. 2019a). In simple terms, effective population size represents the number of individuals who can reproduce and contribute to the diversity of the next generation. This number serves as a proxy of the genetic diversity and represents the overall fitness of a population or species. As a rule of thumb, higher the effective population size, higher is the genetic diversity and overall health of the population, allowing for a better chance of future survival. Hence, low historical population size of bats in the recent past makes them more vulnerable to extinction possibilities under further climatic upheavals (Chattopadhyay et al. 2019a). While the number of species in these panels of investigations were miniscule compared to the vast diversity of existing wildlife, all these studies were limited by the extent of availability of Genomes from diverse species groups on public databases. As more genomes from across all major living taxa will be sequenced and made freely available on public databases in the coming decade, this will radically revolutionize our understanding of the responses of life forms to climate change.

While studying species response to earth-historic climatic fluctuations, we also realized that we can leverage this information to understand the effect of a more proximal episode of climate change that occurred in response to the industrialization during the past few centuries, specifically during the past few decades which were characterized by ultra-rapid urbanization and is now also called the human dominated era of Anthropocene (post 1945, Corlett 2015). The Anthropocene has witnessed an almost unparalleled episode of destruction of natural habitats, sudden rise in global temperature and the sixth mass extinction in the history of life (Dirzo et al. 2014). This has effectively necessitated a knee-jerk reaction from scientists and governments to understand and mitigate damages to wildlife from this calamitous disaster. Again, armed with sophisticated genomic technologies, scientists are hoping to leverage species histories to also predict species responses and their survivability going into the future. In a nut-shell, if we can reconstruct the trajectory of a species or a population going back to regimes of past climate changes, then we may ultimately predict the survivability of the species/ population under the present climatic regimes and also into the future and tailor conservation management solutions specific to each endangered population. However, the first step in this process is to accurately reconstruct species trajectories in the recent past.

While technological advancements in DNA sequencing and analytical protocols have help us understand the past, it is still difficult to reconstruct more recent histories. However, museum collections over last few centuries when compared alongside contemporary populations, provide an avenue to understand evolutionary trajectories between these different time points (Chattopadhyay et al. 2019b). Unfortunately, DNA within these museum samples are heavily degraded due to storage as well as chemical damage from preservatives. Obtaining data from these samples using traditional methods is difficult as well as expensive. Yet, recent advances in genomic technologies has made possible to generate large-scale DNA sequencing data from such samples and coupled with sophisticated bioinformatic tools, we can now generate usable data sufficient for exhaustive evolutionary analyses. For example, comparing genomic data of woolly mammoth fossils from about 45,000 years, when population size was high to a sample from 4,300 years ago revealed detrimental effects of small population size and isolation, which must have preceded their extinction from one of their last strongholds in the Wrangel Island in the arctic ocean (Rogers and Slatkin 2017).

However, until recently no study had documented in detail, the evolutionary responses of a species to the Anthropocene. In a study that is possibly one of the first of its kind, this author led a research venture addressing the effect of human-induced climate change on an urban population of a commonly occurring fruit bat (Cynopterus brachyotis) in the island population of Singapore to address this issue (Chattopadhyay et al. 2019b). We generated large tracts of genomic data from a contemporary population sampled during 2012 and compared it with museum samples collected in 1931, slightly preceding the advent of Anthropocene. 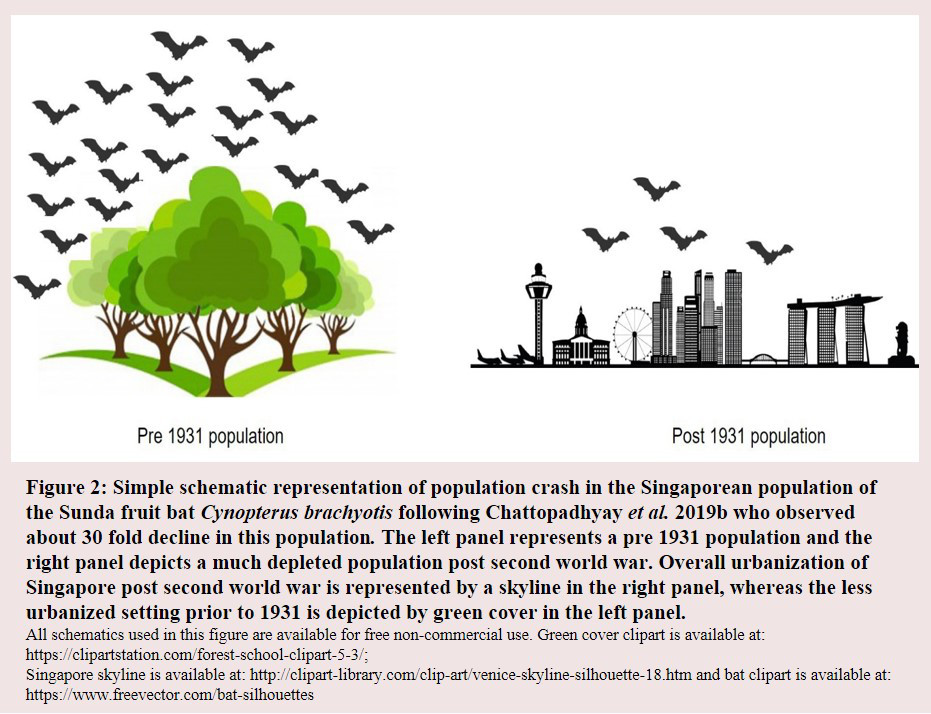 After painfully reconstructing the species history using this time-stamped data we observed signatures of drastic decline in the population size within this species in Singapore (Figure 2), coinciding with the advent of the Anthropocene that also witnessed rapid urbanization and massive loss of green cover in Singapore (Corlett 1992). When we compared the genetic diversity between these two time points, we observed large decay in diversity within the contemporary population compared to the pre-Anthropocene dataset, firmly establishing the ill-effect of human mediated habitat degradation during this period as a potential cause of endangerment.

These observations are particularly important for understanding human-induced climate change. On one hand, these results directly link the endangerment of wildlife to human urbanization, while on the other hand it calls for immediate alarm even a commonly occurring species was found to be greatly affected by human mediated habitat alterations and climate change. If a common species is so severely affected by urbanization, then the fate of endangered wildlife might be even more severe and catastrophic. Last but not the least, these fruit bats are important keystone species, performing critical role in pollination, germination and also regeneration of forest cover of the native flora and are essential for ecosystem functioning (Chattopadhyay 2018) and their decline can adversely affect in many unpredictable ways thereby affecting our survivability as well.

Unfortunately, we have just woken up to this climate emergency, and many more research studies are needed to clearly understand the extent of endangerment that Anthropocene has caused to both common species as well as endangered ones. Only then can we proceed to model future survivability of these species and design conservation management programs to save them from extinction.

BC thanks Dr. Kritika M Garg for helping in the manuscript preparation; and also Dr. Rajasri Ray and Dr. Avik Ray for their comments on an earlier version of the manuscript.