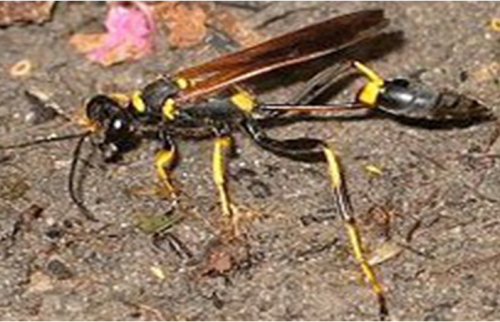 Nest making is a vital instinct of several species of animal kingdom. An animal usually makes nest to protect its offspring and sometimes themselves. In evolutionary biology there is only one scale to measure the fitness of an individual i.e. the number of healthy and fertile offspring it can produce. So better nest making and offspring rearing technique of an individual increases its fitness.

Insects tend to use different materials for nest making. Honey bees use wax which they secrete from their own body, while colony-forming wasps use paper like substance which they produce by chewing plant materials of various kinds. Similarly, some ant species build nest by leaves, whereas insects use existing cavities after a bit of modification, such as beetle tunnels in wood, abandoned nests of other Hymenoptra, or even man-made holes like old nail holes and screw shafts on electronic devices). Apart from plant materials, mud is another commonly used ingredient for nest formation. A fine example of this group is the termite, they make huge nest with complex architecture by mud only.

For insects, the size and shape of their nest varies. Some make pitcher shaped nest, while others are cylindrical. Easy availability and durability underlie the widespread use of mud, besides, mud wall is porous and poor conductor of heat, inside nestmicroenvironment (i.e. humidity, temperature and oxygen level) is perfectly maintained.

Sceliphron caementarium (henceforth mud dauber) is a black wasp with yellow markings and a very thin, long pedicel, and tawny brown wings (Figure 2). Yellow markings vary among individuals but are likely to be found on the base of the antenna (the scape), the dorsal side of the thorax, the pedicel, and the legs.  Females are larger than males, measuring 23 to 25 mm in length, while males are approximately 21 mm in length (Evans 2011, Kim et al. 2014). Adults are diurnal and most active in the late spring and summer in temperate regions, though in the tropics they are active throughout the year (Coville 1987). These nests can be recognized by their clustered, rectangular structure (Figure 3).

After mating, females start to gather balls of mud in their mandibles and fly to the selected nest site. They have remarkable vision and hence are able to identify landmarks to locate their nests (Ferguson and Hunt 1988). Once a single cell is completed, they begin to hunt for spiders asfood for that cell (Shafer 1949). Female mud dauber paralyzes the prey by injecting venom (near the subesophageal ganglion) and keeps it inside the cell for further use (a máximum of 25 spiders can be kept in a cell) (Obin 1982). It lays one egg, generally, on the first spider placed in the back of the cell and gathers more mud to cap the cell and move on to commence building the next cell (Shafer 1949). The larva comes out from egg and gets live spider. Recent study reveals that different strains of Streptomyces spp are found in mud daubers nest. The antibiotics released from those bacteria protect the larva and the paralyzed prey from fungal and bacterial attack (Poulsen et. al. 2011).

The nest making behavior of mud dauber inspired curiosity among the naturalists and entomologists. In India, naturalist Gopal Chandra Bhattacharya spearheaded the research on nest making and observed that mud dauber generates a characteristic humming sound during nest making. He also reported that mud daubers generally collect mud from the edge of ponds, canals located within 40 meter from the nest making point.  However, in absence of nearby source, she may continue her search further on.

In this article, we report some lesser-known facts related to mud dauber nest making.  Following Bhattacharyya’s work, we identified the location of nest by tracking the humming sound and came across distinct behavioral sequences in the nest making with wet soil as well as with earthworm cast (which is hitherto unreported else).

Backyard of our house in Abhirampur village of Bardhaman district, West Bengal, India was our study site where observations were recorded during the end of the monsoon of 2016. The site was shady and soft and wet fresh earthworm casts were in great numbers. An insect was wandering at the nook of the backyard-facing window in search of suitable place for nest.  It went to the ground, rested on multiple places for 2-3 minutes and visited. both soil as well as earthworm cast in a repetitive manner (Figure 4). Finally, it preferred the earthworm cast for mud ball preparation and prepared a mud ball of 1-2 mm in diameter with mouth appendages and fore legs. After few seconds, the ball was carried by the insect towards the selected site for nest making (Figure 5). At the site, a cell was created from that mud ball (Figure 6). The ball preparation, transportation and cell making processes were repetitive and continued almost 7 hrs.

Our previous observation, on the same site, highlighted that an extra step of cleaning was performed if mud selected for nest making. The act of cleaning was so neat and meticulous that all unwanted materials like grass, leaf remains, hay sticks, stone chips was thoroughly removed prior to mud ball preparation. The entire nest making process was observed independently for five times at several places over the study site. It appeared that the mud daubers had a preference for earthworm cast over the plain soil for its nest building.  Our observation seems very similar to the descriptions made by Nachtigall (2001) on of mud-collecting behavior of Sceliphron spirifex. He described the whole process of mud collection in the following four behavioral sequences.

In addition to that, we find that the insect also collect earth worm cast for making her nest. As it was free from undesirable items the mud dauber can straight away build the nest.

Literatures on ethology and ecology of black and yellow mud dauber reveal that there are diverse sources for mud for nest making. It can be mud puddle (Chatterjee 2015), from banks of reservoirs, puddles or other water sources (Fateryga and Kovblyuk 2013), sea sand mixed with silt etc.  Conducting a comparative study on mud ball making of four different species of mud dauber wasp of genus Sceliphron, Chatenoud et. al. (2012) singled out wet soil as the preferred material. Likewise, many other examined nesting material e.g., Polidoriet. al. (2005) made granulometric analysis of mud dauber nest material, but the use of earth worm cast by Sceliphron spp has not been reported

So, a relevant question pops up in our mind, whether the earthworm cast is a batter material for nest making than soil? A comparative study on physical and chemical properties between earthworm cast and soil reveals some interesting facts about the structural stability of the former (Table 1). When 65 rain drops are sufficient to destroy the structural aggregates of soil, the number of drops shoots up to 849 for earth worm cast. Moreover, the density of the earthworm cast is 13.3% less than that of soil, thus, offers an easy carriage. It is free of twigs and small stone so mud daubers that saves a lot of energy. Summarizingly, it is a durable, energy and time saving nesting material for mud dauber. But the story doesn’t end here. Earthworm cast is rich in exchangeable Calcium and Potassium ion, soluble phosphorus and total nitrogen, and micronutrients (Ayoola and Olayiwola 2014). It can act as a good culture medium for Streptomyces bacteria that play a vital role in protection of the nest from the pathogen attack.  Better the durability and protection in the next, more is the survival rate of healthy offspring and survival.  The outcome is an enhanced fitness of the mud dauber.

Our study reveals some interesting facets of nest making but stimulates several questions on behavioural patterns of insect community. As we have seen, utilization of  earthworm cast for nest making is beneficial for mud daubers whereas it is neither beneficial nor harmful to earthworm, In other words, it  is commensalism that is not an obligatory relationship. Now the question arises whether utilization and preference of earthworm cast is a character of the species or only a few populations exercise this and enjoy better evolutionary fitness? Powell and Taylor (2017) reported that in a single population of S. caementarium where all individuals had access to the same resources, there are an evidence of strong individual specialization; individuals utilized different resources (with respect to prey taxa, prey ecological guild, and prey size) to provision their nests. The extent of individual specialization differed widely within the population with some females displaying extreme specialization (taking prey from a single species) while others were generalists (taking prey from 1-6 spider families). So, there is a possibility in case of mud daubers, that some specialist female (taking only earthworm cast for nest making) and generalist female (taking humid soil as well) within the population. That inevitably promote the specialist female to produce fitter offspring than generalists owing to relatively protected nest. That deserves further examination, however.